Home Latest News ‘Politics Must be Left to the Politicians’ 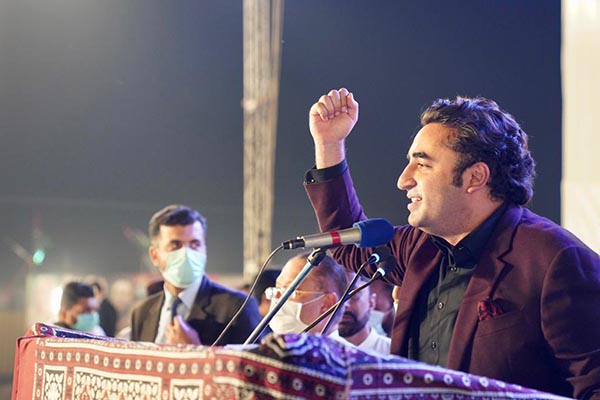 Pakistan Peoples Party Chairman Bilawal Bhutto-Zardari on Tuesday emphasized that his party had always believed that every institution should function solely within its legal mandate, adding that “politics must be left to the politicians” and trust put in the people.

“The people’s decisions must be accepted,” he said, referring to a recent statement by military spokesman Maj. Gen. Babar Iftikhar that the military should not be “dragged into” politics. Bhutto-Zardari clarified that the opposition had no desire to see the armed forces in the political sphere, slamming the incumbent government for “needing support [from the establishment] just to enact legislation.”

Addressing a Pakistan Democratic Movement rally in Hyderabad that was hosted by the PPP, he vowed that the opposition would stage a long march on Islamabad next month. “We will go to Islamabad and snatch back rights [of the people of Sindh],” he said, alleging that Prime Minister Imran Khan “coveted” the province’s islands, coal and gas, but had no concern for its people.

“The selected prime minister says that Sindh is ‘not our province’,” he said referring to a statement by Khan on why the federal government has failed to provide any relief to the people of the province. “If Sindh is not the prime minister’s province then whose is it?” asked Bhutto-Zardari, lamenting that an elected prime minister could never use “such words” for Sindh.

“This incompetent government has brought a tsunami of inflation,” said the PPP chairman, noting that instead of its promised ‘Naya Pakistan,’ the PTI-led government had brought about an “inflation-hit Pakistan.” He said the government’s “anti-poor policies” were making life difficult for the common man, adding that in its bid to secure a loan from the International Monetary Fund, it had adopted policies against the public.

Bhutto-Zardari questioned if anyone had seen even one of the 10 million jobs that Khan had promised prior to his election. Similarly, he said, there had been no progress on the promise of five million homes for the impoverished. “Imran Khan’s government, in the name of anti-encroachment drives, is robbing people of a roof over their heads in Larkana, Hyderabad and other areas [of Sindh],” he claimed.

Stressing that the people of Pakistan were “suffering the burden of an incompetent and corrupt government,” he said Pakistan was now trailing behind countries like Afghanistan and Bangladesh in all areas except inflation. “For how long must we endure this puppet? For how long must we endure such experiments?” he said, vowing to oust the government.

No rest without PTI ouster

At his turn on the podium, PDM President Maulana Fazlur Rehman said governments come into power through the power of the people, not through rigging. “We have all joined hands to restore democracy,” he said of the united opposition, adding that they would continue to proceed with determination.

The opposition “will not rest until these incompetent rulers are removed,” he said and reiterated his allegations of the incumbent government coming into power through a “back door.”

Alleging that the government was planning on “rigging” the upcoming Senate elections, he criticized the government’s attempts to amend the Constitution and the Election Act 2017 in a bid to secure open ballot in the polls. “We are not in favor of putting our names down on the ballot,” he said.

Referring to the Bundal and Buddo island controversy, he said the land belongs to the people of the province and the federal government would not be allowed to take it over. The opposition will rid the country of “COVID-18,” he vowed, referring to the year the PTI came into power.

“Imran Khan, know this: you cannot hold us accountable. Imran Khan, also know this: you are in our clutches now. You must first wring free,” he said, and promised that the opposition would not be forced into any steps and would carefully proceed in its bid to oust the government.

In his speech at the rally, former prime minister Shahid Khaqan Abbas urged the participants to join the March 26 long march to “secure a better Pakistan and a better future for your children.” He said the PDM desired to bring about a change to the system of government, stressing a parliamentary, constitutional setup was the need of the hour.

“The solution to inflation, unemployment, the rights not given to provinces, the rights that the people of Pakistan deserve, the solution to Sindh’s problems all lies in this. This is our message,” he said. “It is our promise, no one can take your rights from you,” he added.