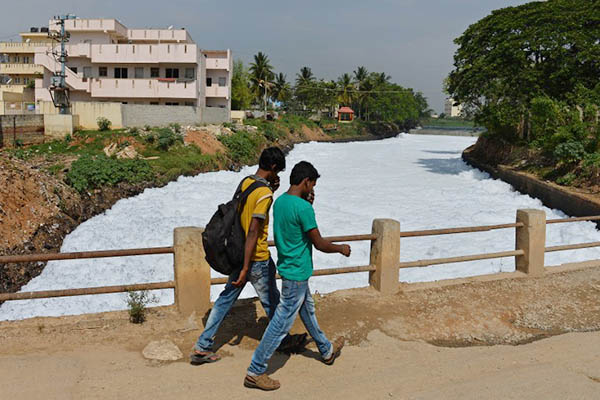 Local media says this is the third time in less than a year that the Bangalore lake has caught fire.

Toxic smoke billowed on Friday from a lake in India’s technology capital Bangalore after the polluted water caught fire, with residents lamenting authorities’ alleged inaction over the blighted environment.

The fire erupted late Thursday after a nearby pile of burning trash apparently caused chemical effluents on Bellandur lake to burst into flames. TV footage showed thick grey plumes of smoke envelope the lake area situated in the heart of the city, home to nearly 11 million people.

Local media said it was the third time in less than a year the lake had caught fire. “We have complained to the authorities so many times but they don’t seem to pay any heed. It kills me to see my city dying like this,” a nearby resident told local television.

Social media users poured their outrage at the authorities for turning a blind eye to the issue. “You can say hell is here when water starts burning,” wrote Madhusudan S, a software developer. “If we don’t manage our garbage #bellandurlake incident will happen across cities in India,” warned Bahar Dutt, a conservationist.

A local administrative official said an investigation has been ordered into the latest fire incident. “The Fire Department suspects that the fire may have been set off by someone setting fire to dry grass or chemicals inside the lake,” a spokesman was quoted as saying by the Hindu newspaper on Friday. “A lot of garbage and construction debris is dumped on the lake bed.”

Bangalore, once hailed as the Garden City, has been paying a heavy price for its success as an I.T. hub with its infrastructure and waste collection services struggling to keep up with decades of unchecked growth. Some 3,500 tons of rubbish is generated in the city every day with a government task force stating the city had become “a land of a thousand sewage tanks.”