Home Culture Pompei: Food as Ancient as the City

Pompei: Food as Ancient as the City 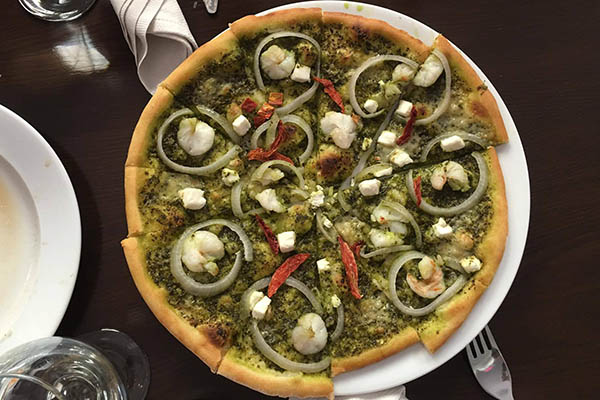 People often ask me, ‘Where did Pompei go wrong?’

A few months ago I went to Pompei in Lahore to celebrate a birthday in the family.  With some outstanding Pompei experiences in the memory bank, I was confident in our choice and was expecting a lively, intimate atmosphere. I never doubted the restaurant’s ability to uphold high standards for food. Obviously, I needed a reality check.

We waltzed in, and I remember someone in our party mentioning that serving a large party like ours (about 20 people) would be a true test. I think we all know where this is headed.

In all fairness Pompei really lived up to its namesake: Pompeii was a city near Naples in Italy, before it was enveloped in volcanic ash and rock when Mount Vesuvius erupted in 79 A.D. All the items on the menu, too, were ancient, and had a ‘sandiness’ to them that was akin to volcanic ash, if I may be so blunt. But we’ll get to the food in a hot second.

The service was horrendous—beyond plain pathetic. Yes, serving twenty people at once is a complicated and strenuous task, but if you can’t cater to such a large group, here’s a tip—don’t even offer. With only one real server dedicated to our table, you can imagine how long it took to get the bread basket out, let alone the appetizers or the sodas. Two hours and ten minutes later, our main courses decided to show up. Some members of my party were yawning and we had run out of conversation—naturally the next topic was complaining about the service, or lack thereof. But with SO much time on our hands, we soon ran out of things to complain about as well.

Meanwhile, no one removed dirty plates/cutlery et al from the table, no one replenished our glasses with water and no one offered any kind of explanation as to why I could have watched the entirety of Mad Max in the time that it took them to prepare a medium-rare steak.

Indifferent and improper service aside, there was plenty to hate on as the orders rolled out. For an accurate depiction of the appetizers, imagine a Picasso painting, fresh off the easel. Burn it. Gather the ashes and try to reconstruct it. Spill a nondescript amount of water on it. Finally put it in an art gallery. It honestly was that bad.

The stuffed mushrooms were bland and grainy at best. The avocado and feta on focaccia was kachumar salad on fancy bread, overly sour and mushy. The pesto and shrimp pizza was salty and had so much pesto on it that very soon I was drowning in basil and pine nuts. The shrimp was smelly. The bruschetta tasted alright, but was soggy, a bit skimpy on the Parmesan, and poorly presented. The glazed beef looked like a good option until you ate some of the disgustingly warm cubed goats cheese that was supposed to compliment it. The margherita pizza seemed fine—I’ll give credit where it’s due.

The main course was 79 A.D., and Mount Vesuvius really spat at Pompei. We ordered all sorts of steaks, from the USDA Angus rib-eyes and strips to the New Zealand grain fed fillets etc. My New York strip steak was mediocre if I’m being polite and improperly defrosted, cooked and served if I’m being candid. And I had it easy. The diner across from me ordered a filet mignon that reeked from a mile away (It was indeed putrid meat and had to be sent back immediately), the diner on my left had a tough time chewing his rib-eye, and the diner on my right had to send back his steak twice because it was almost raw, instead of a pink ‘medium.’ The restaurant did not happen to have the T-Bone and the lamb chops in stock, yet with (what I assume to be) last year’s frozen stock already on our table, they may have offered those items as options anyway.

On the whole, the local and imported beef items were tough, devoid of flavor, improperly handled/prepared/presented and lacked any character whatsoever. How you manage to massacre choice cuts like these is beyond me.

On a side note, the salmon with fennel sauce was as bad as it looked good. The alfredo pasta was watery, bland and lacked any substantial ingredients to make it work. The jumbo prawn risotto was good, flavorful and authentic, as it often is there.

So after a stint of ridiculously bad service, zero attention to detail and rotten food that irks my stomach as I type this, we left the restaurant in disbelief, disappointment and with a vow to think twice before returning. Staying for dessert was off the table, as were we the minute we managed to pay our dues.

Outdated, stale and highly unimpressive—I’d happily give Pompei one star out of five.

P.s: The ‘low-lit’ atmosphere at Pompei ensures two things: 1) That you have no idea what your food looks like so you can’t complain too much without shining a torch directly at it. 2) That you can’t do justice (good or bad) to the food by taking a half decent photo that reflects it.