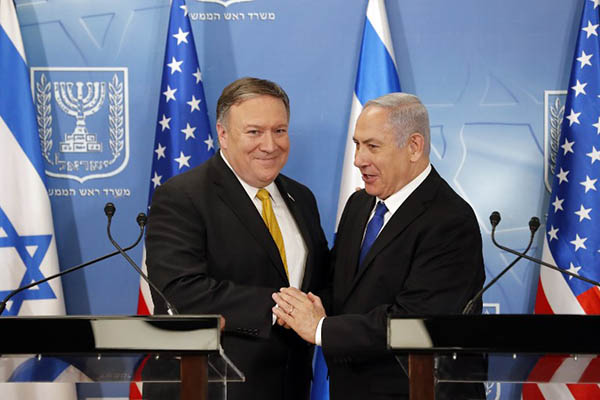 U.S. officials allege Iran is supplying missiles to Houthi rebels and urge regional powers to united against the threat

Washington’s new chief diplomat was to meet Saudi and Israeli leaders on Sunday to rally coordinated opposition to Tehran and brief them on President Donald Trump’s threat to end the Iran nuclear deal.

Secretary of State Mike Pompeo touched down in Riyadh on Saturday shortly after Tehran-backed Houthi rebels in Yemen fired missiles across the kingdom’s border.

U.S. officials traveling with Pompeo told reporters the Houthi missiles had been supplied by Iran, and cited the attacks as evidence that regional powers should work together.

Pompeo had dinner with Saudi Arabia’s Crown Prince Mohammed Bin Salman, and on Sunday he was due to meet his father King Salman. Then he was due to fly on to Jerusalem to meet Israeli Prime Minister Benjamin Netanyahu and then on to Amman in Jordan, wrapping up a weekend of talks with some of Iran’s most fervent foes in the region.

Trump is due to decide on May 12 whether to re-impose nuclear-related sanctions on Tehran, putting in peril the landmark 2015 nuclear accord, which most world powers see as key to preventing Tehran from getting the bomb. But Trump and America’s Middle East allies argue the deal, approved by Trump’s predecessor Barack Obama, was too weak and needs to be replaced with a more permanent arrangement and supplemented by controls on Iran’s missile program.

Pompeo set off on his first diplomatic trip within two hours of being sworn in on Thursday and on Friday—after talks with the NATO allies in Brussels—he appeared to suggest that Trump plans to nix the deal. “Absent a substantial fix, absent overcoming the shortcomings, the flaws of the deal, he is unlikely to stay in that deal past this May,” Pompeo told reporters in at NATO headquarters.

Perhaps the last chance to fix these supposed shortcomings came from talks between Washington and its European allies Britain, France and Germany on a supplemental agreement to sanction Iran’s missile program. But both President Emmanuel Macron of France and Germany’s Chancellor Angela Merkel left Washington this week after talks with Trump having failed to secure any promise that he might keep the core deal alive.

That may be music to the ears of the Saudi and Israeli leaders, who both support a tougher line on Iran. “This administration has made it a priority to address Iran’s missile programs,” a senior U.S. official told reporters in Riyadh, condemning the latest Houthi volley of missiles, themselves in part a response to Saudi airstrikes.

“Iran supplies the missiles that the Houthis fire into Saudi Arabia, threatening civilians,” he said. “Today alone the Saudis shot down four Houthi missiles, the latest in a string of such attacks.”

Earlier, a civil defense official had said that at least one Saudi had been killed by falling shrapnel as his government’s air defense batteries attempted to intercept the missiles near the Yemen border. A Saudi-led coalition airstrike overnight Friday to Saturday killed dozens of Yemeni rebels including two commanders, state media said.

Prince Salman and his father will welcome U.S. solidarity against Iran—just as Israel will want to see greater U.S. support for its efforts against Iranian influence in Syria and Lebanon—but Pompeo has come with requests too.

According to U.S. officials, while Riyadh has a right to self-defense, it must come to see that the solution to Yemen’s civil war will be a political one and its forces must not exacerbate the massive humanitarian crisis there.

Washington also wants to see an end to the Gulf crisis that has seen Saudi Arabia and the United Arab Emirates impose a diplomatic and trade embargo on fellow U.S. regional ally Qatar. And, perhaps most importantly for Trump, Pompeo will urge Saudi Arabia to provide personnel and funding to help U.S. efforts to stabilize northeastern Syria in the wake of the expected defeat of the Islamic State group.

“The president has made clear that he wants to see meaningful participation from states in the region,” another senior U.S. official traveling with Pompeo’s party said. “We want to see the kind of participation, for financial efforts, not just kinetic efforts that would match, parallel, would assist, the U.S. role,” he said. The United States has more than 2,000 troops in Syria.

On Qatar, the U.S. officials said they do not blame one side or the other, but want Riyadh and Doha to sort out the stand-off themselves. And on Yemen, they warned the Saudi-led coalition not to again block or bomb ports that supply vital civilian aid, warning that there is no military solution to the crisis.

“The humanitarian situation in this tragic country cannot be allowed to become worse. It needs to get better. And that means full and free access to humanitarian goods, to commercial goods, to fuel,” one said.

Pompeo will conclude his first diplomatic trip on Monday after talks with senior Jordanian officials and then fly back to Washington to move in to his office in the State Department.