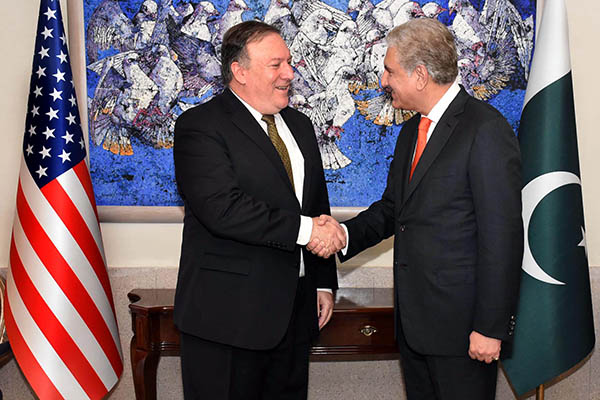 U.S. Secretary of State Mike Pompeo held cordial meetings with Pakistani officials in Islamabad on Wednesday, hours after saying he hoped to “reset” Washington’s troubled relationship with its ally.

The shift in tone between Pompeo and his counterpart Shah Mehmood Qureshi comes days after Washington confirmed plans to cancel $300 million in military reimbursement. But the former CIA director, making his first visit as top U.S. diplomat to a nation whose support is vital in the Afghan conflict, told new Prime Minister Imran Khan he was “pleased” with his meeting with Qureshi.

“We had an excellent meeting. I’m very happy with the meeting we had,” Qureshi agreed, according to a pool report.

Khan, who has voiced anti-U.S. sentiment in the past but vowed a more balanced relationship as premier, said he was hopeful of finding a new way forward with Washington. “A sportsman always is an optimist,” said the former cricketer, who captained Pakistan to World Cup victory in 1992, according to the report. “He steps on the field and he thinks he’s going to win.”

U.S. officials accuse Islamabad of ignoring or even collaborating with groups such as the Afghan Taliban and Haqqani Network, which attack Afghanistan from safe havens along the border between the two countries.

The White House believes that Pakistan’s military bodies have long helped fund and arm the Taliban both for ideological reasons and to counter rising Indian influence in Afghanistan. It believes that a Pakistani crackdown on the militants could be pivotal in deciding the outcome of the long-running war in Afghanistan.

On the plane ahead of his South Asia trip Pompeo said it was time to “turn the page” and suggested that the election of Khan, who has vowed to seek better relations with the U.S., could provide a fresh impetus. “Look, I think there is a new government this time, most of this took place long before the prime minister was in power and I hope we can turn the page and begin to make progress. But there are real expectations,” he said. “There are lot of challenges between our two nations, for sure, but we’re hopeful that with the new leadership that we can find common ground and we can begin to work on some of our shared problems together,” added Pompeo, who was later joined by General Joe Dunford, chairman of the Joint Chiefs of Staff.

“I’m hopeful we can convince them to provide that assistance,” he continued, adding that in his conversations with Khan, they had agreed that peace in Afghanistan was a “shared goal.”

In his earlier comments Pompeo also held out the possibility the military aid, part of a broader freeze announced in January, could be restored under the right circumstances. “We were providing these resources when it made sense for the United States because the partnership was in a place where the actions of our two countries made sense to do that,” he said. “If that arises again, I’m confident we’ll present to the president the rationale for that.”

US had always been corner Stone of Pakistan foreign policy and both must cooperate with each other for mutual benefit on equal basis. Stopping coalition support by US will not help in creating good environment. In the past US withheld supply of F16 to Pakistan and refunded the paid amount after many years.
In the end I feel US should act fast in mutual benefit.