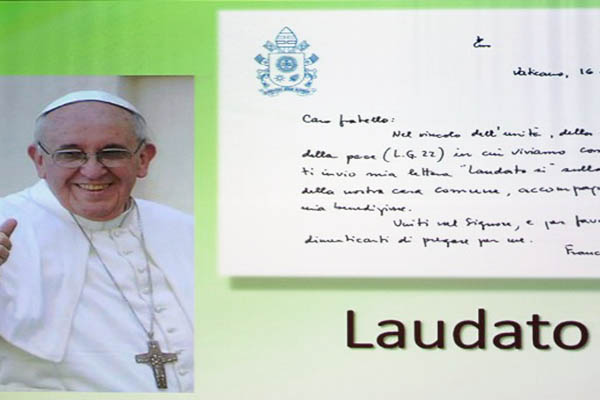 Salient points of the pope’s encyclical on the environment and climate change.

Pope Francis on Thursday urged the world to act quickly to prevent “extraordinary” climate change from destroying the planet and said wealthy countries must bear responsibility for creating the problem and for solving it. The main points of the pope’s Encyclical on the environment, released on Thursday, follow:

Climate change represents one of the principal challenges facing humanity in our time. Its worst impact will probably be felt by developing countries in coming decades. “The urgent challenge to protect our common home includes a concern to bring the whole human family together to seek sustainable and integral development.”

Scientific studies indicate that most global warming in recent decades is mainly as a result of human activity. Humanity must recognize the need for changes of lifestyle, production and consumption.

“It is foreseeable that, once certain resources have been depleted, the scene will be set for new wars.”

“The earth, our home, is beginning to look more and more like an immense pile of filth… These problems are closely linked to a throwaway culture.”

“We know that technology based on the use of highly polluting fossil fuels—especially coal, but also oil and, to a lesser degree, gas—needs to be progressively replaced without delay.”

“If present trends continue, this century may well witness extraordinary climate change and an unprecedented destruction of ecosystems, with serious consequences for all of us.” A quarter of the world’s population lives on, or near, the coast so sea level rises would be extremely dangerous.

Polluting gases must be “drastically reduced” with the reduction of fossil fuels and development of renewable energy.

Developed countries ought to significantly limit their consumption of non-renewable energy and assist poorer countries to support policies and programs of sustainable development. “Many of those who possess more resources and economic or political power seem mostly to be concerned with masking the problems or concealing their symptoms.”

“Access to safe drinkable water is a basic and universal human right… Some studies warn that an acute water shortage may occur within a few decades unless urgent action is taken.”

“The Earth’s resources are also being plundered because of short-sighted approaches to the economy, commerce and production. The loss of forests and woodlands entails the loss of species which may constitute extremely important resources in the future, not only for food but also for curing disease and other uses.”

Enforceable international agreements are urgently needed, since local authorities are not always capable of effective intervention.

The strategy of buying and selling carbon credits “can lead to a new form of speculation which would not help reduce the emission of polluting gases worldwide.” It may simply become a ploy, which permits maintaining the excessive consumption of some countries and sectors.

“Most people profess to be believers. This should spur religions to dialogue among themselves for the sake of protecting nature, defending the poor, and building networks of respect and fraternity.”

“We need also to think of containing growth by setting some reasonable limits and even retracing our steps before it is too late… That is why the time has come to accept decreased growth in some parts of the world.”

“Obsession with a consumerist lifestyle, above all when few people are capable of maintaining it, can only lead to violence and mutual destruction.”

“The economy accepts every advance in technology with a view to profit, without concern for its potentially negative impact on human beings.”