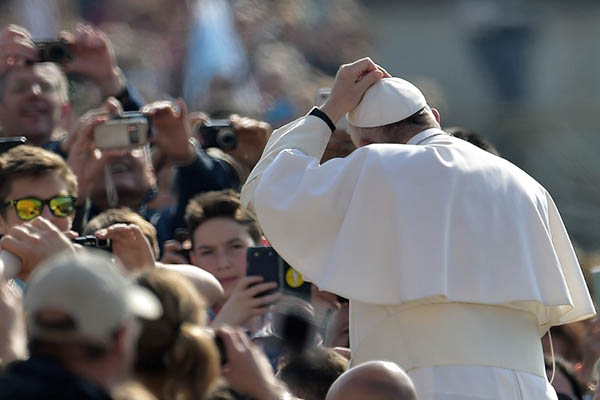 Ashiq Masih and his daughter are currently in Europe to rally support for Bibi’s release.

Pope Francis on Wednesday met the husband and daughter of Aasia Bibi, a Pakistani Christian woman sentenced to death over blasphemy charges, the Vatican said.

“I pray for Aasia, for you and for all Christians who are suffering,” Francis told Bibi’s husband Ashiq Masiq and their 15-year-old daughter, according to the Vatican Insider website.

Mother of five Bibi has been on death row since a row broke out in 2009 with a group of women she was working with in a field. They accused her of insulting Islam’s Prophet, a charge she denies. Soon afterwards, she was jailed and sentenced by a court to death by hanging.

Bibi’s death sentence was confirmed in October 2014 by the Lahore High Court.

Helped by an NGO to travel to Europe, Bibi’s husband and daughter are seeking to rally support for their cause. They want European officials to take up the issue with Islamabad.

Last November, the E.U. parliament called on Pakistan to overhaul its blasphemy laws with a view to repealing them, saying they were being used to target Christians and other minorities. Bibi is waiting for the final ruling of the Supreme Court. Her case is set to go back to trial in May.

During the recent Easter celebration, Bibi asked Pope Francis to pray for her. Several months earlier, she had sent him a letter.

Pope Francis is widely seen as a champion of the poor and marginalized. In 2010, his predecessor Benedict XVI had publicly called for Bibi’s release.

While Francis has not made such a plea, he has called for the end of persecution of Christians in Pakistan and everywhere else.