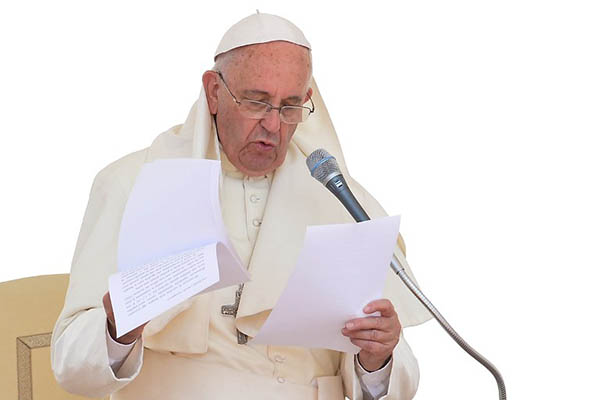 In a thesis on the environment, Pope Francis urges world leaders to establish new modes of production, distribution and consumption.

Pope Francis will call Thursday on the world’s leaders to pull together to fight global warming, publishing his hotly-anticipated thesis on the environment which slams profiteers and slaves to progress.

Released six months ahead of a key climate change meeting in Paris, Francis’s text calls on international actors to take responsibility for “new modes of production, distribution and consumption,” according to a leaked draft.

The pontiff’s attack on the unruly power of the finance sector is expected to elicit a strong reaction from the liberal right, particularly in America. U.S. Republican presidential contender Jeb Bush summed up the conservative backlash Wednesday, quipping, “I don’t get economic policy from my bishops or my cardinal or my pope.”

The other villain of the pope’s piece is technology, or those in thrall to it, who disregard responsibilities and ethics for the gods of consumerism and profit.

The 200-page encyclical, a statement of principles designed to guide Catholic teaching, is the first by the Argentine pope and aims to reach beyond the world’s 1.2 billion Catholics and speak to all, regardless of their religion.

Back in 2013 a U.N. report concluded that there was a 95 percent chance that global warming was the result of human activity. But the straight-speaking Latin American is bringing popularity to the issue that could potentially influence millions of people, generating fresh pressure on the nearly 200 governments that will be represented in Paris in December.

The picture he paints is bleak: climate change is mainly caused by human greed and self-destructive enthrallment to new technologies and progress. But the pope is expected to insist there is still time for mankind to redeem itself.

In a thesis painting the world’s poor as victims of unbridled consumerism by fat cats, he warns failure to act will lead to wars over fertile territory or water. He wants a revolution of “restraint” against “the globalization of indifference.”

Instead of trying to get away with the minimum effort possible, the Argentine believes rich countries should make greater commitments and financial sacrifices than poor ones in the switch from gas, oil and carbon to renewable energies.

“The encyclical is going to have a major impact,” predicted Christiana Figueres, head of the U.N. Framework Convention on Climate Change (UNFCCC). “Pope Francis is personally committed to this issue like no other pope before him and he is deeply eloquent and deeply passionate about this and the encyclical will communicate that.”

The document would likely burnish Francis’s reputation as a socially radical pope but its contents will come as no surprise. The pontiff gave a taste of his views on the issue last month when he warned “the powerful of the earth” that they would answer to God if environmental damage undermined the drive to end global hunger. He has vigorously denied accusations that he is a “Marxist pope,” saying Tuesday that raising the issue of poverty did not make you a communist.

I used to work in the wind business. I got sick to death at the way the profiteers were lying to the public. Then I went to look at the “science” – then I became furious at the way the academics profiteer from this scam by publishing stacks of baseless “research” which amounts to nothing more than their personal views – all paid for by us the public.

And then there are the carbon profiteers and the “jump on the bandwagon” politicians who profited from this scam. And the journalists who copy and paste green garbage to make a quick buck.

And then there are the green NGOs who use this scam to con gullible people to give them money. The developing nations who shed crocodile tears about the evils of “fossil fuel” to try to con the west into giving them money.

And who is it that suffers from all this profiteering. The cost of this scam falls disproportionately on the old and poor – particularly those in fuel poverty.

And since this scam started there have been some 1 million extra winter deaths in the UK alone.

As Satellites show, global temperatures are not rising. But CO2 is having an effect – it is a plant food and so its not surprising that globally we are seeing a greening of the planet with record harvests and deserts being rolled back.

So isn’t it fantastic that CO2 is helping to feed the world’s poor! And what does the pope want to do? Send them all back into starvation!