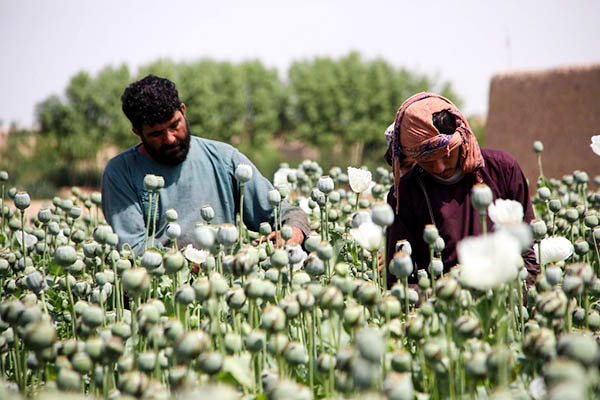 A vast field of towering white poppies sways gently in the breeze, silky petals sometimes tumbling to the ground, a visible marker of the resilience of Afghanistan’s lucrative opium trade.

The sight of a seemingly endless expanse of opium-producing flowers is common across rural Afghanistan, but this farm is in the center of government-controlled Lashkar Gah city—the capital of Helmand province.

In a field AFP visited this month, workers were scoring grooves into the plants’ bulbous seedpods from which the raw, milky-white opium oozes.

“We know it is harmful but we have no other way to earn money, this is the only income for us,” said laborer Mohammad Ghous.

Afghanistan is the world’s top grower of opium, and the crop accounts for hundreds of thousands of jobs. Farmers grow poppies with impunity, as both Taliban and government officials often profit from the lucrative trade.

Afghan opium production took a hit last year as an intense drought dried fields and shrunk cultivation areas. According to a U.N. survey, potential opium production dropped by 29 percent in 2018 compared to the previous year. Still, production remained near record levels—and so far this year some farmers are seeing a rebound amid heavy rains that have poured over parts of Afghanistan in recent weeks.

Conflict is also providing a surprising boon for the industry. “[The] government was destroying poppy fields in previous years, but this year due to the ongoing war they couldn’t,” Mohammad said.

Most poppy production in Afghanistan is in the Taliban-controlled southern part. The insurgents have long profited from poppies by taxing farmers and traffickers, and running their own drug-making factories that turn raw opium into morphine or heroin for export.

Excess supply in recent years has led to falling prices, but a lack of alternative cash crops has left many Afghan farmers hooked on growing opium poppies.

“We have been cultivating poppies for 20 years,” farmer Abdul Hadi said. “It is less tiring, makes a lot of money and is less demanding than growing corn or wheat.”

International donors have spent billions of dollars on counter-narcotics efforts in Afghanistan over the past decade, including efforts to encourage farmers to switch to other cash crops such as saffron. But so far, efforts to move farmers away from their lucrative but dangerous poppies have met with little success.