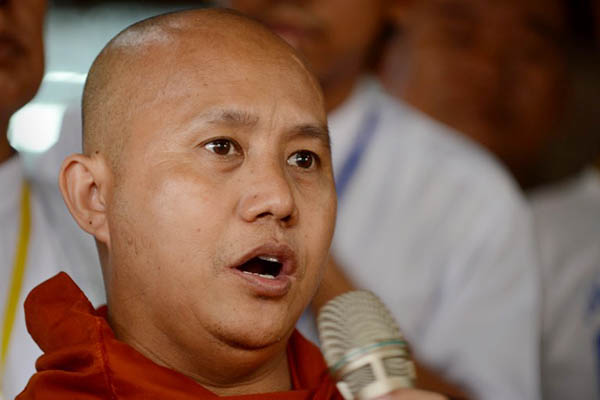 Barbet Schroeder spent months with Ugandan dictator Idi Amin at the height of his power, when corpses would wash up every morning on the shores of Lake Victoria and Kampala was rife with rumors that he was eating his opponents. But in his decades of documenting evil, the veteran Swiss filmmaker says he has never been as scared by anyone as he was by a Burmese Buddhist monk named Wirathu.

“I am afraid to call him Wirathu because even his name scares me,” the highly acclaimed director told AFP. “I just call him W.”

The Venerable W, his chilling portrait of the monk who has been accused of preaching hate and inciting attacks on Myanmar’s Muslim Rohingya minority, has been hailed by critics at the Cannes film festival as a “stirring documentary about ethnic cleansing in action.” What dismays Schroeder is that Wirathu, whom Time magazine dubbed “The face of Buddhist terror” in a 2013 cover, is utterly unfazed by the chaos and suffering he has unleashed.

Buddhism is supposed to be the philosophy of peace, enlightenment and understanding, he thought. It helped center Schroeder’s own life when he made a pilgrimage to India to follow on the path of the Buddha 50 years ago to “cure myself of my jealousy.” But the hate speech and fake news that Wirathu spreads from his Mandalay monastery, accusing Muslims—barely four percent of the country’s population—of trying to outbreed the majority Burmese, made Schroeder’s head spin.

“He is much more intelligent and in control of himself that I thought, devilishly clever in fact,” said Schroeder, who shot his film secretly in Myanmar until he attracted the attention of the secret police. “It was like being faced by a good Jesuit or some very clever communist leader back in the day,” he said.

Rather than “question him like a journalist,” Schroeder just let the monk talk as he did with the other subjects of his Trilogy of Evil, which began with General Idi Amin Dada in 1974 and includes his 2007 film Terror’s Advocate about the French lawyer Jacques Verges, who defended Nazi war criminal Klaus Barbie and Serbian leader Slobodan Milosevic.

“If you wait long enough, slowly the truth would come out,” Schroeder said. “That is what I did with Idi Amin and Jacques Verges. When he lied I’d say, ‘Tell me more, how interesting… So the Rohingya burn their own houses so they can get money from the United Nations…’ For me one of the most shocking moments is when he says they destroy their own houses, and then you see a crowd of maybe 3,000 people fleeing their burning homes. It’s nightmarish.”

In another telling scene Wirathu, leader of the Buddhist nationalist 969 movement, is shown watching Muslims being beaten to death in Meiktila near Mandalay in 2013, a month after he gave an anti-Muslim speech there.

Schroeder said the monk had returned “all peace and love” to the town to call for calm, “but he was at least indirectly responsible for what was happening.”

“Wirathu said all this happened because a monk was killed by the Muslims. But I read the pamphlet that sparked the riots and it sounded very much like his speeches and that he could have written it.”

This month, Wirathu—who has been called the Buddhist bin Laden—stirred tension by touring Muslim areas in troubled Rakhine State despite Myanmar’s top Buddhist body banning him from preaching in March.

Hundreds of Rohingya Muslims died in 2012 when sectarian violence ripped the state apart, and tens of thousands still languish in fetid displacement camps. More than 70,000 have fled into neighboring Bangladesh since October after the military launched a months-long crackdown that U.N. investigators say cost the lives of hundreds of the persecuted minority and may amount to crimes against humanity.

Last week a U.N. envoy criticized the government of Aung San Suu Kyi for not clamping down on “hate speech and incitement to discrimination,” which she claimed “appear to be drastically escalating.” In the film Schroeder, 75, seems to trace Wirathu’s Islamophobia to the rape and murder of a Buddhist woman by a Muslim in his hometown of Kyaukse.

But in person he is not so sure. “Another theory is that his mother left his father and married a Muslim, or because his monastery was burned when he was 14. But every time I checked I was never sure. Why was Hitler like he was? We will never know how this garbage collected in his mind.”