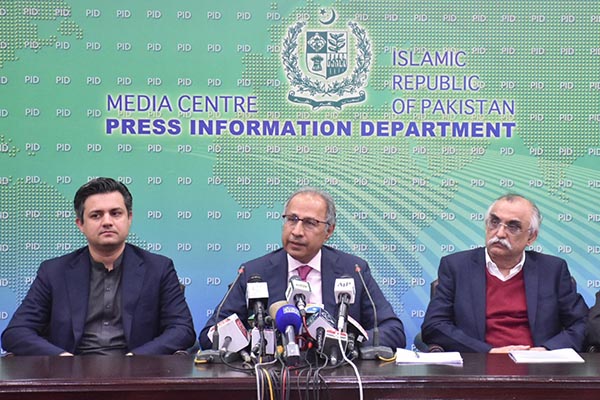 The government’s economic policies have fostered the stabilization of Pakistan’s macroeconomic indicators, which is being recognized by leading international financial institutions, said Adviser to the Prime Minister on Finance and Revenue Abdul Hafeez Shaikh on Tuesday.

Addressing a press conference alongside Minister for Economic Affairs Hammad Azhar and Federal Board of Revenue Chairman Shabbar Zaidi, Shaikh highlighted the indicators of Pakistan’s economy moving in the right direction, adding recovery and rapid growth would soon be visible to the masses. Exports have started to increase as the trade deficit shrinks; portfolio and foreign direct investment is expanding; and growing tax revenues coupled with a stable exchange are all positive signs, he added.

According to Shaikh, there was a nearly 10 percent increase in exports during November 2019, which coupled with a decline in imports has reduced the current account deficit by approximately 36 percent. Revenues in the first five months of the current fiscal year have also increased by 17 percent as compared to the same period last year, he added.

The de facto finance minister said the World Bank president, during a visit to Pakistan, had commended the performance of the economic team, while the Asian Development Bank had increased its loan program by $3 billion as a sign of increasing confidence in the country’s economic future. The International Monetary Fund, during its review of Pakistan’s economic situation, also expressed satisfaction over Islamabad’s meeting of fiscal targets, he added.

Referring to leading investment rating agency Moody’s upgrading Pakistan’s economic outlook from negative to stable, Shaikh said it had sent a positive message about the country to investors across the globe. “Our positive macroeconomic indicators are attracting more and more people from abroad to Pakistan, as evident from portfolio investment of around $1 billion during the current fiscal year,” he said, adding if the improvement continued then there would be no need to go back to the IMF for another loan again.

Shaikh said foreign direct investment had witnessed a record increase of 236 percent last month, and local investors were also showing more trust as evident from the country’s stock market crossing the 40,000 mark. “Bloomberg has reported that, in dollar terms, the Pakistan Stock Exchange has proven to be the best performer in the world during the previous three months,” he added.

The adviser also praised the “record increase” of non-tax revenues, saying he hoped the government would surpass the target of collecting Rs. 1,200 billion in non-taxable revenue by the end of the current fiscal year. He said the government was now focused on creating maximum job opportunities, which was only possible by increasing economic activities in the country. “We want our exports to increase and our businessmen to get maximum profit. For this we are providing subsidy to the businessmen, beside loans,” he added. He said the government was providing subsidy of Rs. 300 billion on loans to exporters.

During the press conference minister Azhar said the government’s ambitious tax revenue target could not be achieved due to import compression of about $5 billion during the first five months of the current fiscal. However, he added, the FBR had still managed to increase tax revenues by 17 percent, which was a major achievement.