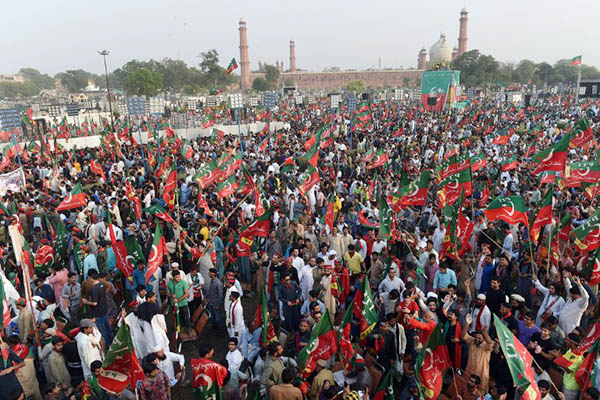 A new political map is in the offing for Pakistan

On April 29, the Pakistan Tehreek-e-Insaf (PTI) held its “power show” at the historic Iqbal Parks venue in Lahore with 50,000 chairs provided for all comers. By any estimate the park was filled—and physically devastated, according to the day-after reports. PTI party workers and supporters had been transported from all over Pakistan—party leader Shah Mehmood Qureshi’s son had personally led a caravan of 100 cars from Karachi—and party chief Imran Khan proudly referred to Muhammad Ali Jinnah’s 1940 address at the same venue that had collected an “estimated” 100,000.

Khan’s address went down well because of its constant Islamic references and denigration of a malfunctioning state after 70 years of bad governance. His strong point was the people-focused “welfare” reforms made credible by his oft-cited role in developing the Shaukat Khanum Cancer Hospitals in Lahore and Peshawar and PTI’s governance in Khyber-Pakhtunkhwa province. What highlighted his performance further was the literal wipeout of the Sharif family by his dharna politics, and the predicted defeat of the ruling Pakistan Muslim League (Nawaz) in upcoming elections. His somewhat unrealistic economic panacea was the promotion of tourism in a country plagued by global “advisories” that warn their citizens against visiting.

The Pakistan Peoples Party (PPP) held a parallel meeting in Karachi’s Liaquatabad district. This trespass into the Mutahidda Qaumi Movement (MQM)’s turf was addressed by Chairman Bilawal Bhutto-Zardari, his audience too having come into the city from all over Sindh. He targeted the PMLN and PTI both, but the main reason for this show of strength was the decline of the MQM monolith into squabbling factions and the mess the MQM mayor of Karachi had made of the city. He also attacked the center ruled by PMLN, and made fun of PTI’s achievements in Khyber-Pakhtunkhwa.

Notwithstanding the two power shows, the old political map is bound to change this year, with most of the change happening in Punjab on the lines of the prediction that no party would get a clear majority in the next Parliament.