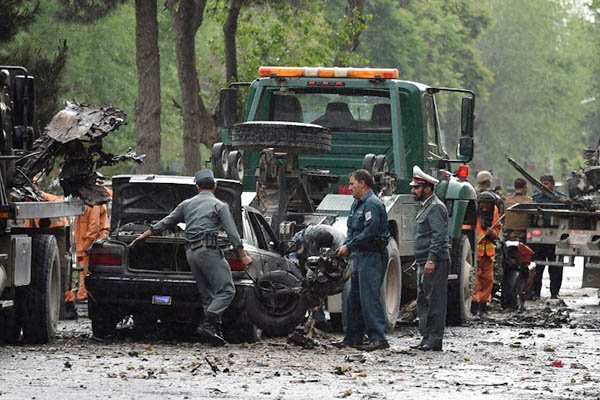 At least eight people killed, another 25 wounded in explosion near U.S. embassy

A powerful blast targeting a foreign forces convoy near the U.S. embassy and NATO headquarters in Kabul killed at least eight people and wounded 25 on Wednesday, officials said, the latest attack in the Afghan capital.

Interior ministry spokesman Najib Danish confirmed the toll, telling AFP most of the victims were civilians on the busy main road during the morning rush hour. “We are still checking the nature of the explosion, but I confirm a convoy of foreign forces was passing by when the explosion happened,” he said.

The blast damaged two of the heavily armored MRAP [Mine Resistant Ambush Protected] vehicles carrying the foreign troops, and left a small crater in the road, witnesses and an AFP photographer said.

MRAPs, which are designed to withstand large explosions, are routinely used by international forces moving around Kabul. Officials have not yet confirmed the nationalities of those caught in the blast. At least three civilian cars were also damaged, with one ablaze, while windows were shattered up to several hundred meters away. Firefighters and ambulances rushed stunned survivors to hospital.

One security source told AFP that at least two American soldiers received minor injuries in the blast from a white Toyota Corolla that exploded as the convoy drove by, though that had not been verified by officials. No group has yet claimed responsibility for the attack, which came days after the Taliban launched their so-called “spring offensive,” in which they vowed to target international troops.

The annual offensive normally marks an upsurge in fighting during warmer weather, though this winter the Taliban continued to battle government forces.

Pentagon chief Jim Mattis, who visited Kabul last month as the U.S. seeks to craft a new strategy in Afghanistan, warned of “another tough year” in the war-torn country for both foreign troops and local forces. He would not be drawn, however, on recent calls by NATO commander in Afghanistan General John Nicholson for a “few thousand” more troops to break the “stalemate” against the insurgents.

The Afghan conflict is the longest in U.S. history—U.S.-led NATO troops have been at war there since 2001, after the ousting of the Taliban regime for refusing to hand over Osama bin Laden following the 9/11 attacks in New York and Washington. The U.S. has around 8,400 troops in the country with about another 5,000 from NATO allies. Most are taking part in NATO’s train, assist and advise mission, though some area also carrying out counter-terror missions targeting Islamic State and Al Qaeda.

Afghan forces have been straining to beat back the Taliban insurgents since U.S.-led NATO troops ended their combat mission in December 2014. Already beset by killings, desertions, and struggles over leadership and morale, they faced “shockingly high” casualties in 2016 and the first part of 2017, according to a U.S. watchdog SIGAR.

The report did not include a massacre at a base near northern Mazar-i-Sharif last month, which saw militants dressed in army uniforms slaughter at least 144 Afghan recruits, according to a U.S. official. With more than one third of Afghanistan outside of government control, civilians also continue to bear a heavy brunt, with thousands killed and wounded each year and children paying an increasingly disproportionate price, according to U.N. figures.

Kabul province had the highest number of civilian casualties in the first quarter of the year due to attacks in the capital, a recent U.N. report showed. Most were carried out by the Taliban, though Islamic State claimed several which targeted Afghanistan’s Shia minority.

The U.N. had called on all groups to “take every measure possible to prevent unnecessary and unacceptable harm to Afghan civilians.”