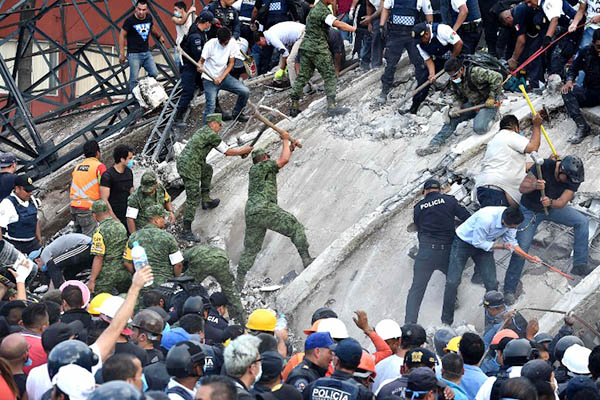 At least 248 people were killed when a powerful 7.1-magnitude earthquake struck Mexico on Tuesday, including 21 children crushed beneath an elementary school that was reduced to rubble.

The destruction revived horrific memories in Mexico on the anniversary of another massive quake in 1985, the disaster-prone country’s deadliest ever. One of the most gut-wrenching scenes was at the Enrique Rebsamen primary school on Mexico City’s south side, whose three floors collapsed into one, trapping students and teachers inside.

Twenty-one children and five adults were killed, said Major Jose Luis Vergara of the Mexican navy, who was coordinating a rescue effort that involved hundreds of soldiers, police, civilian volunteers and rescue dogs. He said another 30 to 40 people remained trapped inside, while 11 children have been rescued so far.

Emergency workers found a teacher and a student alive beneath the rubble and are trying to get them out, he said. But the situation was precarious. Late into the night, part of the wreckage collapsed as rescuers continued their search.

Local media reports said soldiers had located one child alive beneath the ruins. They administered oxygen through a tube, but were so far unable to extract him.

President Enrique Pena Nieto, who rushed to the site, warned the death toll could rise. “Unfortunately, many people have lost their lives, including children, in schools, buildings and homes,” he said in a national address.

The devastation struck across a swath of central states.

The devastation struck across a swath of central states and the death toll as of early Wednesday was 248, the head of the national disaster response agency, Luis Felipe Puente, said on Twitter. In addition to Mexico City, people were also killed in Puebla, Morelos, Mexico state and Guerrero, said Interior Minister Miguel Osorio Chong.

Local media reported that families were getting WhatsApp messages pleading for help from desperate relatives trapped under debris.

Memories of the devastating 1985 earthquake, which killed at least 10,000 people, surged to the surface on what was meant to be a low-key 32nd anniversary. Adding to the national sense of vulnerability, the quake also came just 12 days after another that killed nearly 100 people and left more than 200 injured, mainly in the southern states of Oaxaca and Chiapas.

Many in the capital quickly ran for safety outdoors when walls around them swayed and cracked. “I’m so worried. I can’t stop crying. It’s the same nightmare as in 1985,” Georgina Sanchez, 52, sobbed to AFP in a plaza in the capital.

The quake—which occurred in the early afternoon, hours after city authorities had conducted an earthquake drill—caused massive damage in the bustling center of the city. “It was horrible,” said resident Leiza Visaj Herrera, 27. “I had to hold on to the ground.”

Scenes of chaos erupted in the quake’s aftermath. Traffic jammed to a standstill before blanked-out stoplights, and anxious people ran between vehicles as ambulances tried to make headway, sirens blaring.

In several locations, large crowds of people clambered on buildings that were now piles of stone and tangled metal, trying to pull people out.

Emergency workers held up signs commanding “Silence” so crews could listen for the sounds of any survivors.

Jorge Lopez, a 49-year-old Spaniard living in Mexico City, said he raced to his children’s school in the central Roma district, to find it collapsed but his offspring safe but terrified. “We arrived at the school and everyone was crying, everyone was frantic, and the kids were holding on to a rope,” he said.

Patients were evacuated from a nearby hospital, wheeled out on beds and wheelchairs. Pena Neto said on Twitter he had ordered the evacuation of damaged hospitals.

At one collapsed building in the Roma district, dozens of people dug through rubble as they waited for the arrival of heavy machinery to move the massive chunks of stone. Officials called out for more volunteers, and for water.

A woman standing and watching the efforts with her husband, a doctor, turned to him and said, “Darling, if you want to help, go ahead. Just give me your glasses, and be careful.”

Mexico City’s international airport closed for more than three hours following the quake. The stock market was forced to shut. Fearful residents whose homes were damaged were preparing to spend the night on the street or in parks.

On the clogged and darkened roads, muggers came out at night to assault motorists.

Officials in several other countries responded to the quake with offers of help. Honduras sent a 36-strong rescue team. U.S. President Donald Trump, who has forged an antagonistic relationship with Mexico, tweeted: “God bless the people of Mexico City. We are with you and will be there for you.”

Justin Trudeau, the prime minister of Canada, tweeted: “Devastating news from Mexico City. My thoughts are with those affected by today’s earthquake—Canada will be ready to help our friends.”

Mexican Foreign Minister Luis Videgaray responded by saying “Mexico sincerely thanks the displays of international solidarity that we are receiving.”