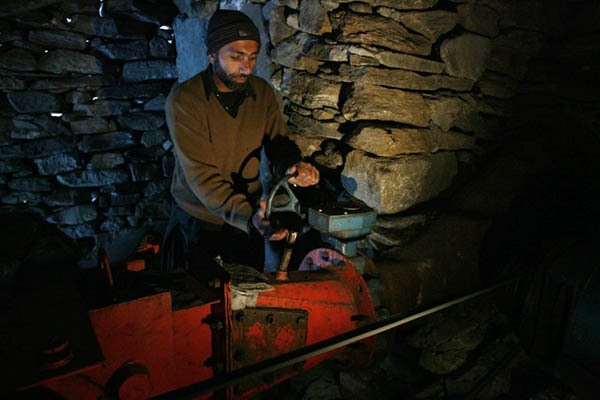 Pakistan-administered Kashmir’s power minister says long-term plan is to export power to the rest of Pakistan.

While Pakistan grapples with a crippling energy crisis, people in one corner of Kashmir have taken matters into their own hands, using small-scale turbines to generate electricity from streams and rivers.

The country is plagued by power cuts, lasting up to 22 hours a day in the blistering summer in parts of the country, blighting ordinary people’s lives and hampering the economy. Government moves to tackle the problem have so far yielded little success and have largely focused on moving from expensive imported oil to cheaper coal.

But in Kashmir’s upper Neelum Valley, hundreds of families have chosen a more environmentally friendly option, setting up small-scale hydro projects to produce electricity for a few hours a day. “The turbine was paid for with contributions from 50 families and cost us Rs. 300,000 in total,” said Rahimullah, 35, who operates a turbine machine.

Some were moved by necessity—less than half of the Neelum Valley’s 200,000 inhabitants have access to electricity from the grid. Small turbines are driven by the flow of water to work generators to produce power, and the 200-kilometer Neelum River that forms the picturesque valley and its tributaries give the area great potential for hydroelectric generation.

Shafiq Usmani, the deputy director of the Hydro Electric Board of Neelum Valley, says up to 3,000MW could be generated, while the area’s demand is only 15 to 20MW. The growth in hydropower has an important knock-on effect—with an electricity supply, there is less reason for residents to cut down trees for cooking and heating. “All the beauty of the Neelum Valley is dependent on those forests and streams, and this can only be sustained if we give them clean energy,” said Usmani.

One local, Mushtaq Ahmad, said the move to electricity had made a huge difference to his family’s health. “When we had no electricity for lighting there was always smoke in our house, as we used wood for heating and cooking which causes different kind of diseases,” he said. “Since we installed this small hydro project for the past three years, thanks be to God, we have got rid of these diseases and also got some other benefits.” He also called on the government to expand hydro projects in the region so that more people could enjoy their benefits.

Pakistan faces an electricity shortfall of around 4,000 megawatts in the summer, leading to lengthy blackouts that have strangled economic growth. To combat the crisis, Pakistan has sought Chinese help in building power generation projects across the country, including coal, nuclear and hydro.

Chinese engineers are also busy in the construction of a Neelum-Jhelum hydropower project in Pakistan-administered Kashmir, estimated to be complete in November 2016, which will generate 969MW of electricity.

Chaudhry Latif Akbar, the territory’s finance and hydroelectric power minister, said the long-term plan was to export power to the rest of Pakistan on a large scale. “The total identified hydro energy potential in Kashmir is approximately 8,200MW and we are currently producing 1,130MW,” he said. “The total need is approximately 400MW. We will try to use our resources to produce electricity to help out Pakistan to overcome its ongoing energy crisis.”