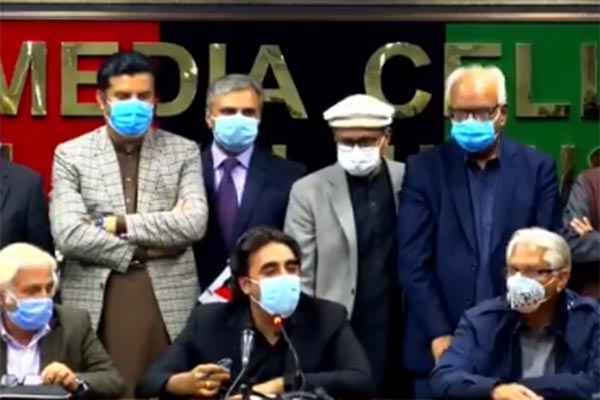 Bilawal Bhutto-Zardari addresses a press conference after a meeting of the PPP CEC. Twitter

Pakistan Peoples Party Chairman Bilawal Bhutto-Zardari on Tuesday announced that a Central Executive Committee (CEC) meeting of the party had decided to challenge the Pakistan Tehreek-e-Insaf-led government at every available forum, including the upcoming Senate elections.

Addressing a press conference, he said the party had decided to instruct all lawmakers to submit resignations from assemblies to the party leadership by Dec. 31, adding that a date for submission to the respective speakers had yet to be taken by the Pakistan Democratic Movement alliance. He said the PPP’s demands remained unchanged—it wanted free and fair elections and an end to the establishment’s role in politics.

Summarizing the issues facing the people of Pakistan, he said the PTI’s policies had produced rampant inflation, unemployment, and poverty. Apart from skyrocketing prices of basic necessities, he said, the government had also implemented “unbearable” tariff hikes in electricity and gas. He also slammed Pakistan’s economic growth, noting that it was the “worst in South Asia.”

The PPP chairman stressed that the country was experiencing inflation higher than that of Bangladesh or Afghanistan. “Think about it. What does it mean? It means that the people of Pakistan are facing poverty which is worse than that of our neighbors,” he said, adding that this had all cemented the PPP CEC’s demands for the PTI government’s ouster.

“The establishment’s interference in politics that led to the creation of this government and due to whom the current government continues to remain in power … that is the root cause for the problems facing the people of Pakistan,” he said, stressing that the time had come for the prime minister to “go home.”

According to Bhutto-Zardari, the CEC also endorsed an All Parties Conference resolution and the PDM’s overall action plan. “As soon as the APC action plan and strategy are decided upon, we’ll go ahead in the same manner,” he stated, referring to resignations and an eventual long march on Islamabad.

“The selected, incompetent, inept, and failed government should be challenged at Pakistan’s roads. This unsuccessful and corrupt government should be challenged in the courts, the Parliament, the Punjab Assembly, the National Assembly, in the Senate elections, and through no-confidence motions,” he said. “The CEC believes that if we remain steadfast in fighting them [PTI-led government], we will be successful,” he said, adding that the party would present all these suggestions to the opposition alliance during its next meeting, set for Jan. 1.

To a question, the PPP leader ruled out any possibility of dialogue with the government before Prime Minister Imran Khan steps down. “We can definitely talk with the government,” he said. “But first the P.M. should resign. There should be a level playing field before any dialogue. There’s no harm in talks but he [Khan] needs to resign before any such initiative,” he added.