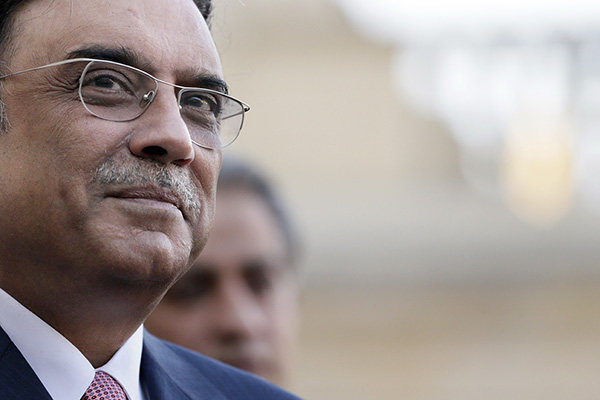 The channel, which was suspended over its association with the Axact company following a scandal about fake degrees, announced the new show on Twitter. Pakistan Khappay with President Asif Ali Zardari broadcast its first episode on March 19 with a promise to air new episodes every Sunday at 9:30 p.m.

In the first episode, Zardari appeared live from Bilawal House in Karachi and discussed current affairs with host Shab Sheraz. Commenting on Pakistan’s international standing, the former president criticized the lack of a foreign minister. “When a government does not have a foreign minister for four years, it shows that it does not care or understand the position Pakistan holds in international political and the challenges it faces.” He said the PMLN does not have a foreign policy and the PPP, if it comes back into power, would need to frame it from scratch.

On ongoing tensions between Pakistan and India, Zardari claimed Prime Minister Nawaz Sharif needed to stop treating international affairs through the prism of business relations. “I think Mian Sb [Prime Minister Nawaz Sharif] thinks one of the neighbors [India] is a market, while neglecting the other neighbor [Afghanistan] despite shared cultural values.” Similarly, Zardari said that Islamabad needed to conduct dialogue with U.S. President Donald Trump and understand that the new American president is a businessman and approaches politics from a different perspective.

The PPP leader also criticized the PMLN’s stance on the China-Pakistan Economic Corridor. “It is our collective responsibility to ensure Pakistan’s sovereignty is not impacted by this project. I don’t think Mian Saab understands how important CPEC is. It needs to evolve Beijing’s interest in Pakistan, not merely serve as transport corridor.”

Zardari is the second politician to start a career as a political analyst on Bol TV. Earlier this month, former president and retired Army chief Pervez Musharraf featured on Sab Se Pehle Pakistan with President Musharraf. The weekly TV show airs on 8:00 pm. on Bol TV.