PPP Office-Bearers of PDM to Resign ‘With Immediate Effect’ 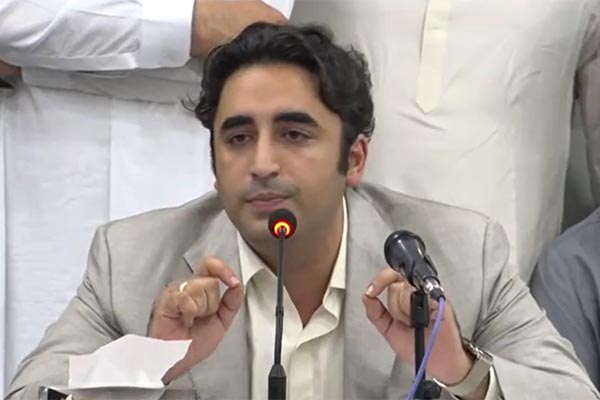 Following meeting of Central Executive Committee, Bilawal Bhutto-Zardari says no political party has right to ‘dictate’ their will on any other party

The Central Executive Committee (CEC) of the Pakistan Peoples Party (PPP) on Monday announced that it had directed all its office-bearers within the opposition’s Pakistan Democratic Movement (PDM) alliance to resign from office “with immediate effect” to protest the issuance of a show-cause notice.

“The CEC has rejected the so-called show-cause notice. It has directed all its office bearers in the PDM to submit their resignations from these offices with immediate effect in protest to the attitude, conduct and actions of other office-bearers within the PDM,” PPP Chairman Bilawal Bhutto-Zardari announced at a press conference after the CEC meeting. He said the CEC had maintained its position that resignations from Parliament should be an “atom bomb” and should only be utilized as a last recourse to oust the incumbent Pakistan Tehreek-e-Insaf-led government.

“Those who wish to resign should do so. But no one should try and impose their will, or their dictation, on any other political party,” he said. “The PPP will continue in our consistent, firm opposition to the selected government that has been ongoing since day one,” he added.

Claiming that politics requires equality and respect, he said this was especially true of politics of alliance. “The CEC demands an unconditional apology to the Awami National Party and PPP for this obnoxious conduct,” he said of the show-case notice. “The PPP stands by the ANP in this regard and will not abandon them under any circumstances,” he said, adding that there could be no success for opposition politics without working relations between the opposition parties. “There is no concept of show-cause notices in democratic movements,” he claimed.

Commencing his post-CEC presser, Bhutto-Zardari said the PPP had always questioned the criteria under which the incumbent government had secured a bailout from the IMF. “This is an anti-public deal,” he said, adding that the latest tranche of $500 million had come with conditions that placed undue burden on the common man. “We condemn this in the harshest possible terms,” he said, stressing the PPP believed Pakistan should exit from this deal.

“This is a bad deal, it is a wrong deal, it is not in the interest of the people of Pakistan,” he said. “It consistently targets the poor and the working people of Pakistan,” he said. “You are imposing on the common man the same burden as you are the country’s elite,” he claimed, noting that gas tariffs and electricity tariffs were both being increased, which would hamper development.

Noting that the government had not yet shared the details of the deal with either the public or Parliament, he lamented that all the available information had come from the IMF. “We condemn this. If you already know what rates you’ll be imposing [as agreed upon in the deal], then why even hold a budget session? Get the budget passed by the same IMF that you agreed to those terms with,” he said and lashed out at the government’s practice of using ordinances to push its desires through.

The PPP chairman also lashed out at the government’s “confusing” position on Kashmir, claiming its foreign policy was serving as a voice for the disenfranchised residents of India-held Kashmir. “Kashmir is an important issue for Pakistan; it is our responsibility to ensure that we give a voice to the Kashmiris who cannot speak out today,” he said.

“The BJP manifesto had envisaged ending the special constitutional status of Kashmir. So why did the P.M. [Imran Khan] declare during the campaign that if Modi won, the issue of Kashmir could be solved?” he questioned. He also wondered why Khan’s initial reaction to India’s Aug. 5, 2019 decision was “what can I do?”

Slamming the premier’s “campaigning for Modi” that had since transformed into claims of Modi being a Nazi, Bhutto-Zardari noted that despite claiming not to hold any dialogue until Kashmir’s special status was restored, the government now seemed eager to talk peace and restore peace. “This kind of contradiction and confusion in the foreign policy cannot continue,” he said.

“Since 2017, PPP has raised questions over the census and its flawed approach,” he said, adding that it had set aside its protest after being assured that 5 percent of the results would be verified. “This census determines the delimitations of constituencies and the funds allocated for provinces and its results are very important,” he said, reiterating that the PPP CEC had already rejected the census results in 2017. “The recount that was our condition has not yet been taken. It doesn’t count the people living in a certain area at a given period of time regardless of domicile. It doesn’t count the number of people actually consuming resources. We want a free and fair census,” he added.