PPP Questions Why P.M. Khan Not to Blame for Sugar Export, Freight Subsidy 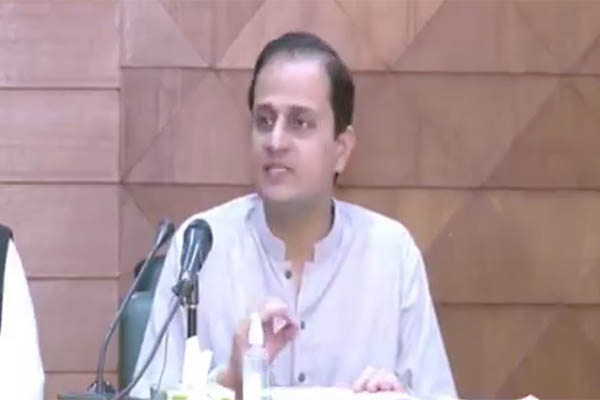 Adviser to Sindh C.M. on Law Murtaza Wahab. No Credit

Members of the Sindh government, which is ruled by the Pakistan Peoples Party, on Thursday questioned why Prime Minister Imran Khan had not been held responsible for allowing and approving both the export of sugar, as well as a freight subsidy of Rs. 2 billion, that resulted in a substantial price hike of the essential commodity last year.

In a press conference summoned to respond to allegations of corruption by Special Assistant to the P.M. on Accountability Shahzad Akbar a day earlier, Advisor to the Sindh C.M. Murtaza Wahab thanked the federal government for making the sugar inquiry commission report. “Without this report, we would not have been able to ascertain that it was the prime minister himself who approved the export [of sugar],” he said.

“The subsidy was given to 26 sugar mills in Sindh,” he said, adding that it had been disbursed transparently to protect the interests of sugar farmers. He also clarified that the Sindh government had not given any subsidy to the sugarcane sector in 2018, 2019 and 2020, adding that transactions from 2017 and earlier could not have caused a sugar shortage in 2019-20, as alleged by the federal government.

Wahab said that despite Akbar’s claims that Chief Minister Murad Ali Shah had sought to benefit the Omni Group through subsidies, the commission to probe the sugar price hike had not summoned Shah. “The sugar prices quoted in the report are from the year 2019. As I said before, the Sindh government does not have anything to do with this matter as it did not issue any sugar subsidy in 2018, 2019 and 2020,” he reiterated.

“The federal government … wanted to save the prime minister and the cabinet hence, in an attempt to divert the issue, they went into the past,” claimed Wahab, adding that a truly transparent inquiry would have questioned why the prime minister allowed sugar to be exported, resulting in its shortage, as well as approving freight subsidy.

In the same press conference, Sindh Information Minister Nasir Hussain Shah slammed the Terms of Reference of the inquiry commission. “The name of the chief minister who was to be summoned, his name had not been included. The prime minister who approved sugar subsidies, his name had also not been mentioned,” he said.

Referring to Pakistan Tehreek-e-Insaf leaders Khusro Bakhtiar, who is currently Minister of Economic Affairs, and Jahangir Tareen, Shah claimed sugar mills either owned by them—or linked to them, as in Bakhtiar’s case—had received the lion’s share of subsidies. “More than 84 percent of the sugar subsidy was given [by Sindh] to sugar mills of Jahangir Tareen and Khusro Bakhtiar and other people,” he said, adding it had been disbursed as there was an excess of sugarcane at mills, and they were delaying the purchase of more stock from farmers.

“This subsidy, as well as other benefits, are given when the demand for sugar is low in the international market,” he said, adding that the real question was how the price of sugar had soared to Rs. 80/kg during the PTI government’s tenure despite all previous governments also providing subsidies, as admitted by Akbar.

On Wednesday, Special Assistant to the P.M. Akbar had claimed Sindh had provided the most benefit to Omni Group through subsidies despite opposition by the provincial cabinet. “The chief minister of Punjab appeared in front of the sugar inquiry commission but the chief minister of Sindh did not,” he said, claiming the incumbent PTI would soon take action against those named in the report.

In a routine occurrence for the PTI, Akbar spent much time taunting the opposition—particularly the PPP and PMLN—alleging they had not properly read the report in demanding action against sitting lawmakers for their role in last year’s sugar crisis. Despite admitting last week that PTI stalwart Jahangir Tareen has pocketed “millions,” Akbar’s focus on Wednesday shifted to everyone not aligned with the incumbents.

He claimed “a very important portion” of the report was the subsidy given by PMLN, and specifically by former premier Shahid Khaqan Abbasi, despite that decision having no bearing on the sugar crisis that erupted under the PTI regime.