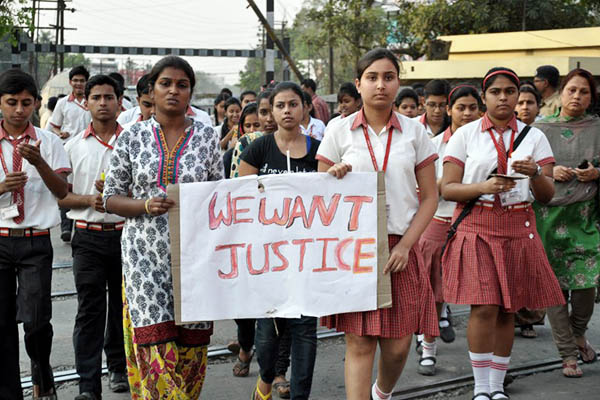 Four of six attackers in assault on 71-year-old have been identified, but there has been no major breakthrough in investigation.

Prayers were said at churches across India on Sunday for an elderly nun who was gang-raped at a convent in an attack that has intensified anger over sexual violence and fueled fears among beleaguered Christians.

The assault on the 71-year-old is the latest in a string of high-profile rapes in India and comes amid a spate of attacks on churches that prompted Hindu nationalist Prime Minister Narendra Modi to promise a crackdown on religious violence.

The nun was attacked late Friday after a gang of half a dozen robbers broke into a convent school in eastern West Bengal state and ransacked the premises, police said. The robbers gagged a security guard before assaulting the nun. They then entered the principal’s room and stole cash, a laptop and a mobile phone, according to police. Four of the six attackers have been identified through CCTV footage and a reward of ₹100,000 is on offer for any leads on the suspects. Eight others have been detained for questioning, but a breakthrough has proved elusive so far.

Arnab Ghosh, a police superintendent who visited the convent near the town of Ranaghat, said the robbery appeared to have been carefully planned. “CCTV footage showed that six men, aged between 20 and 30, scaled the boundary wall around 11:40 p.m. and entered the school and disconnected the telephone lines,” he said. “At least two of them were armed and the rest were carrying burglary tools. In the chapel, a holy scripture was found torn and… a bust of Jesus was broken,” Ghosh said.

Prayers were held Sunday in churches in West Bengal for the nun, who is recuperating at a hospital in Ranaghat.

“In our Sunday Mass, we prayed for the sister to recover quickly from trauma, fear and her physical injuries,” said Thomas D’Souza, the archbishop of Kolkata. “They not only committed a heinous crime, but they also vandalized the chapel… This is the first time such an attack has happened in India.”

Christian leaders in state capital Kolkata said they were planning to hold a candlelight vigil on Monday followed by a solidarity rally in support of the victim. “We are shocked that a thing like this has happened in our state. We want the culprits to be arrested and brought to justice swiftly,” Father Saroj Biswas told the NDTV news network.

Late Sunday, a church under construction in northern Haryana state was vandalized and the cross replaced by an idol of Hindu god Hanuman, the Press Trust of India news agency reported.

In the western state of Goa, which has a sizeable Christian population, the attack on the nun was condemned during the morning mass while there were also prayers for her in New Delhi.

The gang-rape has added to the sense of fear and dismay among the country’s Christian minority, which has been deeply upset by attacks on churches. Modi had been heavily criticized for not speaking out earlier against religious violence and has also faced flak for remaining silent about a spate of mass “re-conversions” of Christians and Muslims to Hinduism.

“Even if you call [the rape] an isolated incident, the background and the atmosphere for such an attack had already been there, so you cannot simply ignore it as a one-off incident,” said Father Savarimuthu Sankar, a spokesman for the Delhi diocese. The incident also adds to a grim record of horrifying sexual assaults in India, which last week banned a documentary about a December 2012 gang-rape that sparked domestic and international outrage.