Home Latest News ‘Prayers of Thanks’ 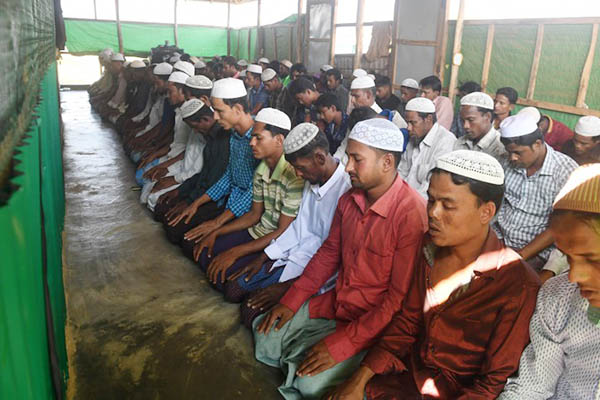 Rohingya refugees offer thanks after scheduled repatriations to Myanmar halted

Rohingya Muslims living in Bangladeshi refugee camps gave prayers of thanks on Friday after threatened repatriations back to Myanmar were halted.

None of the 720,000 Rohingya who fled Myanmar after a military crackdown in August last year volunteered for the returns, which were scheduled to start Thursday. Bangladesh has not said when or if a new attempt will be made to persuade the Rohingya to leave the refugee camps on the Myanmar border now filled with about one million people.

The failure of the repatriations dominated Friday prayers in camp mosques.

“We prayed to Allah for our salvation. And our prayers were granted. We thank Bangladeshi authorities as they understood our position about repatriation,” Imam Hossain said after the weekly ceremony. “We are so happy it did not happen,” said 55-year-old refugee Abdul Hamid.

Another, Abdul Malek, said he had not seen his parents since fleeing Myanmar’s Rakhine state in August 2017. “I have not seen my parents for over a year now. I want to see them but I don’t feel safe enough to go back.”

The 32-year-old schoolteacher said he would return “at a moment’s notice” if Myanmar authorities gave the Rohingya nationality.

For decades the Rohingya have been denied citizenship and other rights by Myanmar, which regards them as “Bengali” interlopers. Many say they are too scared to return because of the deadly crackdown in the Buddhist-dominated state, which the United Nations has said needs a genocide investigation.

Bangladesh and Myanmar agreed to start repatriations last year and a preliminary list of 2,260 refugees who could go back was prepared.

The U.N. and aid groups said only volunteers should go back and none came forward.

Myanmar blamed Bangladesh for the delay saying it made “weak” preparations for the returns. Bangladeshi authorities have said no Rohingya would be forced to return. The government, struggling with the refugee influx, has not said what its next step in the crisis will be.