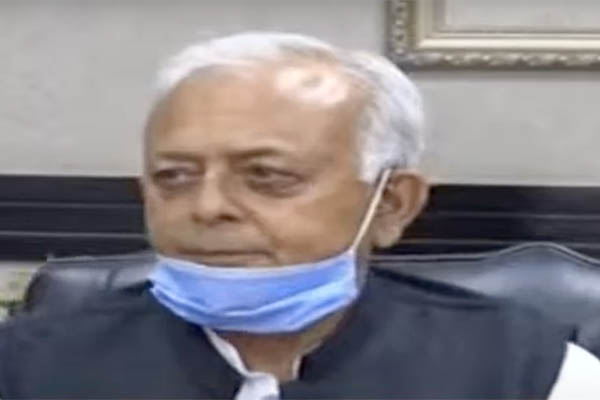 Aviation minister submits initial report to Parliament, claims pilots were ‘distracted’ and not focusing on their job

A preliminary probe into last month’s PIA plane crash in Karachi has alleged that the pilots were not focused on their job, and their distraction resulted in the tragedy, Federal Aviation Minister Ghulam Sarwar Khan informed the National Assembly on Wednesday.

Submitting the interim report to Parliament, the minister said that no technical fault had been found in the aircraft, adding that the pilot had also admitted this during a conversation with air traffic control.

“I spoke to one of the [two] survivors and they told me that after the plane crashed into the roof of a house, he was still strapped into his seat, which crashed onto its first floor, where he was eventually rescued,” he said.

Discussing the crash, Sarwar said the aircraft had touched the runway thrice without the landing gear being deployed, which had damaged its engines. “When the plane took off again, both its engines had been damaged,” he said.

Sarwar further alleged that the pilot and the co-pilot were not focused on their job, claiming the two were discussing the coronavirus pandemic, as it had affected their families. He also cast some blame on the cabin crew and ATC. “Those who have passed away, may God forgive them. Those who are alive and are responsible will be held accountable,” he said, adding that the complete investigation report would be presented in about a year.

Discussing the government’s efforts to compensate the victims of the plane crash, Sarwar said 29 houses had been damaged. “Those whose houses were damaged in the plane crash have been compensated and are being compensated. They have been given temporary shelter,” he said.

The minister said authorities were also trying to compensate the families of the plane crash victims. “Those who were injured on the ground have also been compensated,” he added.

The minister said a massive reforms process would be initiated by the government to make PIA a profitable enterprise once more. He alleged that around 30 percent of pilots employed by the national flag carrier had fake pilot licenses. “Pilots are also appointed on political basis, unfortunately,” he claimed, adding that merit had been ignored.

Sarwar assured the House that the government would initiate action against the PIA pilots who were found guilty of having fake licenses or degrees.

A Pakistan International Airlines (PIA) flight from Lahore to Karachi crashed near Jinnah International Airport on May 22, mere minutes before it was due to land, leaving 97 dead, and two survivors.