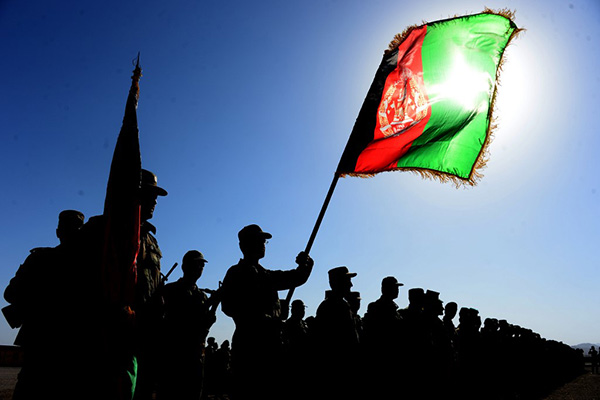 Afghanistan, post-U.S. withdrawal, will likely become a nation caught between the interests of its neighbors

America is finally leaving Afghanistan after fighting its longest war, which can best be described as an expensive deadlock. The move comes after Washington reached a peace deal with the Taliban—who control almost half of rural Afghanistan—under which the insurgents have expressed willingness to allow democracy to flourish in the country on the basis of Afghan “consensus.”

On Feb. 20, Taliban leader Sirajuddin Haqqani wrote in The New York Times that, after the U.S. withdrawal, the insurgents would like an Afghanistan that “allows women to have education and employment rights” but was not certain about democracy in the face of Islamic ideology to which the Taliban is wedded. On whether Afghanistan would remain a democracy he said, “My response to such concerns is that it will depend on a consensus among Afghans.” This wording does not inspire much hope.

Last year’s general election, whose results were massively delayed, has been challenged by all the contestants except the winner, President Ashraf Ghani. Despite this win, there is a growing possibility that Ghani might find his government going wobbly once the Americans are gone and the neighbors start interfering to shore up the Afghan communities they have been supporting.

The Taliban would likely dominate in the post-U.S. period and they would potentially be backed by a Pakistan unembarrassed by its view of what Afghanistan would become and what it would mean for Pakistan itself. Iran would doubtlessly shore up its relations with what has been called the Northern Alliance in the past, comprising communities that the country’s Pashtun nationalism leaves out of all reckoning. Iran would also be motivated by revenge for the U.S. killing of military commander Qassem Soleimani.

Iran’s Afghan policy is not as black-and-white as Pakistan’s. It has established good relations with the Taliban leadership, allowing its Sunni warriors to consolidate their Northern Shura using its influence and allowing the Taliban to establish a command and control center in the Iranian city of Mashhad. The Shura is actually controlled by Iran. In the past, the Taliban has been using Iran as its retreat, as was revealed when its leader Mullah Akhtar Mansour was killed by a U.S. drone in May 2016 in Balochistan “while traveling back from Iran.”

Iran has a powerful “subordinate” army called the Al Quds Force, which has organized what is titled the Fatemiyoun militia, drawn from the Afghan Shia Hazara community and the 1.5 million Iran-based Afghan refugees. Thousands of Fatemiyoun fighters, including many Pakistanis, have only recently returned to Afghanistan after “jihad” in Syria. For Iran, the general anti-Americanism of all Muslims, including those in Pakistan and its military leadership, comes in handy and obfuscates the underlying sectarian venom that permeates the Islamic world. Iran signed on a security cooperation agreement with Afghanistan in 2013, but opposed the U.S.-Afghan pact signed the following year. Its influence among all kinds of Mujahideen goes back to the Soviet invasion of Afghanistan of 1989.

The Al Quds Force has inducted thousands of young Shia men from Afghanistan, Pakistan, Lebanon, Iraq, Syria, Yemen and the Palestinian territories, to use them as proxies to protect Iranian interests. In 2018, Hazara and other Shias comprised the majority of the estimated 50,000 Afghan members of this force. According to American estimates, “about  half a million Afghans are estimated to have returned from Iran in 2019.” The new commander of Al Quds has been handling “regional” operations in Afghanistan and elsewhere.

If Iran exploits the non-Pashtun communities of North Afghanistan in the coming civil war, India would support the government led by Pashtun President Ashraf Ghani and “Tajik chief executive Abdullah Abdullah.” It would be confronted by the Taliban backed by Pakistan, even if Islamabad would like to stay away from the Afghan chaos. It is vulnerable to refugee influx every time Afghanistan falls apart and has 1.38 million Afghans on its soil “officially,” if you don’t count the extra million that goes unregistered. It may be for this reason that Pakistan Army chief General Bajwa has started fencing the long border with Afghanistan and wants to “normalize” with India.

The Afghan army, always subject to desertions, will not be able to face up to its north-south internal split backed by its neighbors. It has a strong component from the non-Pashtun north because the Pashtuns were likely more attracted to the Pashtun Taliban and other non-Shia—or anti-Shia—groups such as the Islamic State. Add to that the “problem” of Al Qaeda leader Ayman al-Zawahiri, said to be hiding in Pakistan. But the deep-seated vendetta underlying the coming Armageddon in post-withdrawal Afghanistan goes back to the 1998 massacre in Mazar-e-Sharif where a Pakistani militia called Sipah-e-Sahaba led the Taliban assault on the city and killed a number of Iranian officials in the Iranian consulate.

Pakistan has tasted the blowback from its course-correction in 2017 when it decided that all the external and internal warring hordes sheltering in its “tribal areas” had to be eliminated. Called Radd-al-Fasad, it was triggered after Islamabad itself was threatened with a “sympathetic” takeover by the “government” of Mullah Fazlullah in Swat. Since then, Pakistan has been unable to protect its Shia community of indigenous Hazaras in Quetta where it had earlier created the “Quetta Shura” as the “capital” of the Taliban. Today Quetta is easily approached by terrorists from Kandahar via Spin Boldak through two passes guarded by the Pakistan Army, but there is some evidence that the slaughter of the Quetta Hazara community is conducted from within the Sunni population of the city penetrated by Islamic State and remnants of the ousted Taliban.

The “post-withdrawal” war in Afghanistan is going to devastate what is left of the country after 30 years of bloodshed. Pakistan is most likely to be adversely affected by it because of the under-development of its border areas and lack of proper writ of the state in almost half of its territory. Iran on the other hand will be better placed to ward off the fallout because of its totalitarian nature and military dominance.