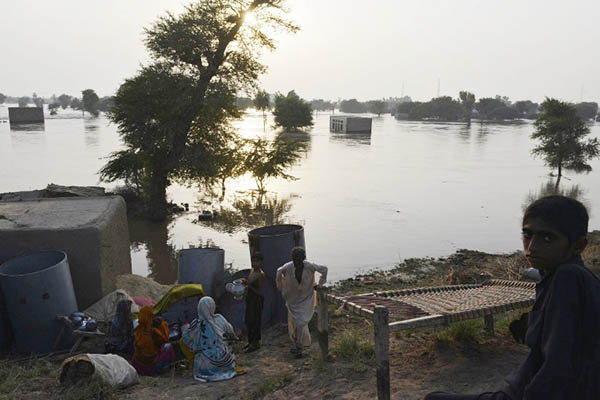 Pakistan Army has set up explosives at strategic embankments in case floods need to be diverted from Multan and Muzaffargarh.

The floods and landslides from days of heavy monsoon rains have now claimed more than 450 lives in Pakistan and India, with hospitals struggling to cope with the disaster. In Pakistan, the National Disaster Management Authority (NDMA) said late Thursday more than 1.8 million were now affected by the raging torrents—a figure that includes both those stranded at home and those who fled after the floods hit.

In neighboring India, between 300,000 and 400,000 people remain stranded in India-administered Kashmir where phone lines have been down for days and food and water supplies are running low, although the floods have begun to recede.

The floodwaters are moving downstream through Pakistan’s Punjab province, inundating huge swathes of farmland in the country’s breadbasket and most prosperous area.

The Army on Thursday planted explosives in preparation for breaching three strategic dykes to divert waters away from the southern Punjab cities of Muzaffargarh and Multan. A senior Multan government official said the dykes were likely to be blown in the evening, but the blast may be put off if the waters abate.

Similar drastic measures were taken on Wednesday to protect the city of Jhang, further upstream, where 10,000 people were evacuated overnight, according to senior rescue official Rizwan Naseer. Hafiz Shaukat Ali, a senior administration official in Multan, said all schools in the area would be closed for the next two days.

The military, which often plays an important role in disaster relief efforts, said troops had rescued 22,000 people stranded by floodwaters around Punjab and Pakistan-administered Kashmir.

Pakistan’s NDMA said seven more people had died in the flood, raising the death toll to 264.

Prime Minister Nawaz Sharif visited flooded parts of Pakistan-administered Kashmir on Thursday, announcing $10,000 compensation for families who lost loved ones in the floods and pledging to reopen blocked roads as soon as possible.

In India, Prime Minister Narendra Modi held an emergency meeting on the disaster late Wednesday, after reports of victims attacking emergency workers as anger over the slow pace of the rescue effort boiled over. Modi said getting food and water supplies to people in the worst affected areas in and around the state capital Srinagar was the priority. He ordered a “massive effort to ensure basic hygiene and sanitation in the water-logged areas of Srinagar,” a government statement said, amid fears of an outbreak of disease.

He ordered the home ministry to send officials to the flood-hit Himalayan state, whose government has come under fire from locals and the army over what they say is a failure to coordinate the rescue effort. India-administered Kashmir’s Chief Minister Omar Abdullah said it was chaos at the start of the rescue operations as the waters rose so quickly that the entire government machinery was literally swamped.

Hospitals in Srinagar have been overwhelmed by the disaster, which has left many without power or clean water.  One doctor at the Ahmed hospital in Srinagar described the desperate conditions in an impassioned plea on the 24-hour news channel NDTV on Thursday. “There is no electricity. The hospital is entirely working on two gensets [portable generators], on alternate basis. Nothing is coming from anywhere … we had to hijack water, there is no water here,” said the doctor, whose name was not given. “We cut bedsheets in two and sterilized them for use in surgery.”

Pakistan has suffered deadly floods around the same time every year since 2010, when the country was hit by the worst inundations in its history. The waters that year swamped 160,000 square kilometers of land—an area bigger than England—and cost the country nearly $10 billion, the equivalent of 6.5 percent of GDP. Around 1,800 people were killed and 20 million affected.

But an analysis this week by Topline Securities, a Karachi-based investment company, said this year’s floods do not appear to be on the same scale. “Seeing the preliminary numbers … reported by NDMA, magnitude of the flood looks like 2012 and 2013, but much lower than 2010,” the report said.