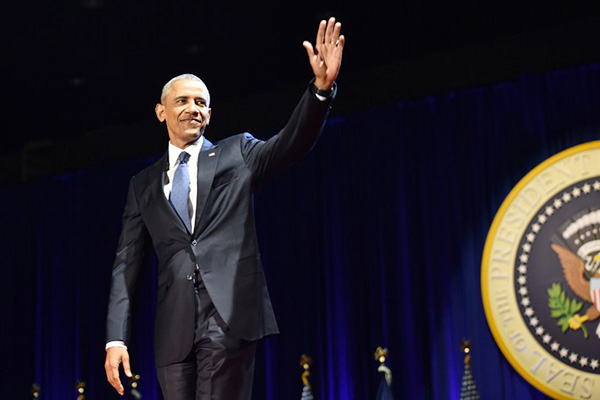 In one of the world’s loneliest jobs, Obama found comfort in books.

As a great admirer of Abraham Lincoln, the 16th U.S. president, Barack Obama, the 44th, shares with his distant predecessor a passionately felt hobby—for books, and for reading.

Books, Obama said in one of his final interviews before he leaves office on Friday, have provided comfort, succor and guidance during his eight years at the helm of the world’s only superpower. “At a time when events move so quickly and so much information is transmitted,” he told The New York Times, reading helped him “slow down and get perspective.” Books also gave him “the ability to get in somebody else’s shoes,” he said.

Obama noted it was impossible to say whether this had made him “a better president. But what I can say is that they have allowed me to sort of maintain my balance during the course of eight years, because this is a place that comes at you hard and fast and doesn’t let up.”

Asked which books he had turned to in some of the low points of his presidency—such as the financial crisis that left the U.S. on the edge of a precipice, and the Newtown massacre in which 20 young schoolchildren were murdered—Obama noted that the job can be “very isolating.”

“So sometimes you have to sort of hop across history to find folks who have been similarly feeling isolated, and that’s been useful,” he said. Among the writers and leaders who had given him “a sense of solidarity,” Obama said, were Lincoln, Martin Luther King Jr., Gandhi and Nelson Mandela.

“Churchill’s a good writer,” he added. “And I loved reading Teddy Roosevelt’s writing.” Presidential biographies had been useful, Obama said, in helping him shrug off any notion that “whatever’s going on right now is uniquely disastrous or amazing or difficult.”

“It just serves you well to think about Roosevelt trying to navigate through World War II,” said Obama.

In his book Dreams From My Father, Obama—whose father was black but who was raised by his white mother and grandparents—said that as a young man, he turned to writers like James Baldwin, Richard Wright, W.E.B. Du Bois and Malcolm X in an effort “to raise myself to be a black man in America.” Later he immersed himself in the writings of philosophers from Saint Augustine to Friedrich Nietzsche and Jean-Paul Sartre.

Asked which books had been “touchstones” for him over his eight years in office, Obama responded without hesitation: the plays of William Shakespeare. He remembers, when assigned a Shakespeare play in high school, thinking “My God, this is boring.” But then he said he took a “wonderful Shakespeare class in college where I just started to read the tragedies and dig into them.”

Obama—a onetime lecturer in constitutional law who every year takes daughters Malia and Sasha Christmas shopping at Washington’s “Politics and Prose” bookstore—said he often turns to V.S. Naipaul, whose worldview he does not always share but whose writing inspires him.

Obama said that he reads for about an hour a day, generally in the evening. Having spent little time writing in the White House—other than for his speeches—Obama says he now plans to buckle down to work on his memoir, relying heavily on a journal he has kept—though “not with the sort of discipline that I would have hoped for.”

After a busy campaign year, he also plans to catch up on a lot of reading. “There’s something particular about quieting yourself and having a sustained stretch of time that is different from music or television or even the greatest movies,” he said.