Press Freedom in Pakistan Under Pressure 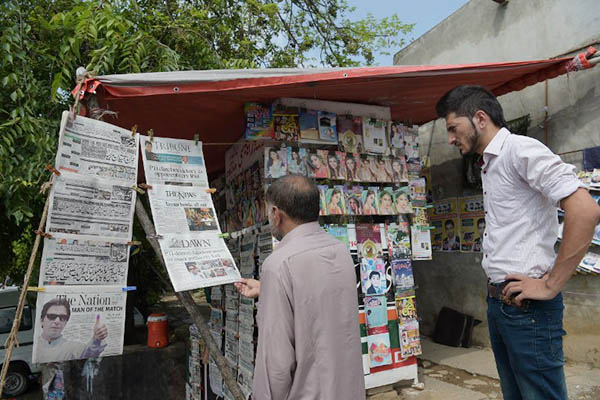 Committee to Protect Journalists alleges reporters are pushed to self-censorship

Press freedom is under pressure in Pakistan, where journalists face intimidation by the military, which often pushes them to self-censure, says a report by the Committee to Protect Journalists released on Wednesday.

The Army has “quietly, but effectively, set restrictions on reporting,” from barring access to encouraging self-censorship “through direct and indirect methods of intimidation,” the report claims. “Privately, senior editors and journalists say the conditions for the free press are as bad as when the country was under military dictatorship, and journalists were flogged and newspapers forced to close,” it adds.

It notes that the deterioration comes as killings of journalists have declined, but links the military, intelligence, or military-linked groups to half of the 22 journalist murders in the past decade. And it says the increasing intimidation and decrease in killings are linked.

A “more cautious approach to covering sensitive topics—essentially self-censorship—accounts for much of the reduction in violence,” it cites an advocacy group as saying.

The report gives voice to several journalists who say they have been subjected to intimidation tactics, a rarity as self-censorship grows. One was beaten in a brazen attack in the capital Islamabad, another by what he claims were members of the security forces in civilian clothing in Karachi.

“The mindset [of the military] now is to control the total narrative and reduce the diversity of opinion, so anything that is going against their narrative, they see as a threat,” agreed a director at a news broadcaster which says it has faced disruption by authorities. “We used to feel, ‘write whatever you want.’ Of course, get the facts right. Now, people are scared,” he added.

Some noted that the definition of “anti-state activity” was not restricted to reporting critical of the Army, with one journalist saying he had been threatened after writing about labor issues.

Others noted how blasphemy, an inflammatory charge that can lead to deadly mob violence, has become another source of intimidation, with journalists censoring their reporting on religious matters.

Some 88 percent of the 159 reporters interviewed by the NGO Media Matters for Democracy claim to censor what they write or report, with seven in 10 saying that doing so made them feel safer.

The CPJ said the military had not responded to requests for comment. The Army has long denied such accusations.

The CPJ report comes out a few months after general elections described as the “dirtiest” in Pakistan’s history, tainted by widespread allegations the playing field had been titled in favor of eventual winner Imran Khan.

Some of Pakistan’s biggest and most powerful media outlets have claimed they were pressured to tilt their coverage towards Khan during the campaign, an accusation the military denied.