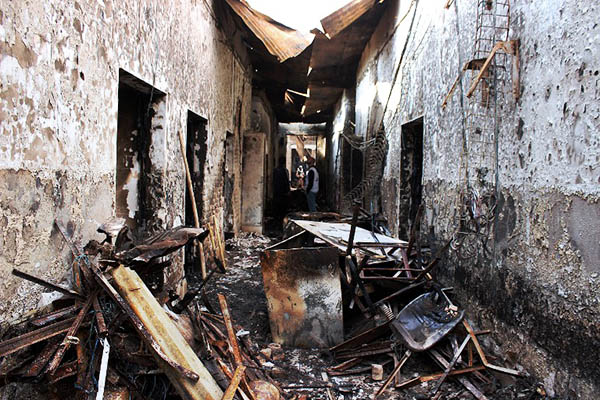 Pressure was growing Thursday for an international inquiry into a catastrophic U.S. strike on a Doctors Without Borders hospital in Afghanistan, after the military detailed “tragic but avoidable” errors but refused to say if there would be an independent investigation.

The MSF slammed American forces for “gross negligence” on Wednesday after the U.S. commander in Afghanistan said the Oct. 3 strike on the charity-run hospital in Kunduz city was “caused primarily by human error.”

The raid killed 30 people and forced the charity to close the trauma center—the only one in the region—while stirring an avalanche of global condemnation.

General John Campbell, speaking at NATO headquarters in Kabul Wednesday, blamed in part the fatigue of U.S. troops who had been battling a Taliban offensive in Kunduz for five days, adding that the mistake was “compounded by process and equipment failures.”

The general said during Wednesday’s press conference that individuals involved in the attack had been suspended pending “standard military justice,” but refused to give details.

“The frightening catalogue of errors outlined today illustrates gross negligence on the part of U.S. forces and violations of the rules of war,” MSF general director Christopher Stokes said.  Human Rights Watch demanded an independent investigation, saying “serious questions” remained about “whether the attackers knowingly or recklessly fired on a functioning hospital.”

The rights group added: “This warrants a criminal investigation into possible war crimes, but the Pentagon did not clarify today whether recommendations made to senior commanders include possible criminal charges. Moreover, we are deeply concerned that any decision making about possible criminal charges remains within the chain of command responsibility for military operations in Afghanistan.”

Campbell’s spokesman Wilson Shoffner refused to say if the U.S. probe would be followed by an independent international investigation. “We believe the investigation completed was full and impartial, and we stand by the findings and recommendations, and we support the process by which it was conducted,” he said.

Stokes reiterated the charity’s position, saying the investigation leaves “more questions than answers” and the attack “cannot only be dismissed as individual human error or breaches of the U.S. rules of engagement.”

“The lack of an explanation that could give us a feeling of security and reassure us for the future is really a major problem,” he added.

MSF has called for the International Humanitarian Fact-Finding Commission—an independent body created under international law but which has never been used—to investigate the attack. However, it would need permission from the U.S. and Afghanistan to proceed, and neither country has so far agreed.

In the aftermath of the strike last month MSF branded the incident a war crime.

Campbell said Wednesday Afghan forces had requested close air support from the U.S. for a clearing operation that night, including on a former Afghan intelligence building they believed had been commandeered by Taliban forces. From that point on he said, “multiple errors occurred.”

The AC-130 gunship crew took off early, he said, and did not have time for a normal mission brief or to be given crucial material “including the no-strike designations.” Then, he said, the electronic systems on board the aircraft malfunctioned, “preventing the operation of essential command and control capability and eliminating the ability of the aircraft to transmit video, send/receive email, or send/receive electronic messages.”

Next, Campbell said the crew “believed it was targeted by a missile,” forcing the plane to deviate from its “normal orbit” which then degraded the accuracy of some of its targeting systems.

Commanders on the ground gave the crew the correct coordinates for the intended target, the former Afghan intelligence building, Campbell said. But when they entered them into the degraded systems, they correlated to an open field 300 meters from the target.

“The investigating officer found that the aircrew visually located the closest large building near the open field, which we now know was the MSF trauma center,” Campbell said. The crew were given permission to engage by a commander who, Campbell said, “lacked the authority” and who was “unable to adequately distinguish” between the hospital and the intended target.

The strike began at 2:08 a.m., Campbell said. “It took the headquarters [at Bagram] and the U.S. Special Operations Commander until 2:37 a.m. to realize the fatal mistake,” he said. “This is an example of human and process error.”