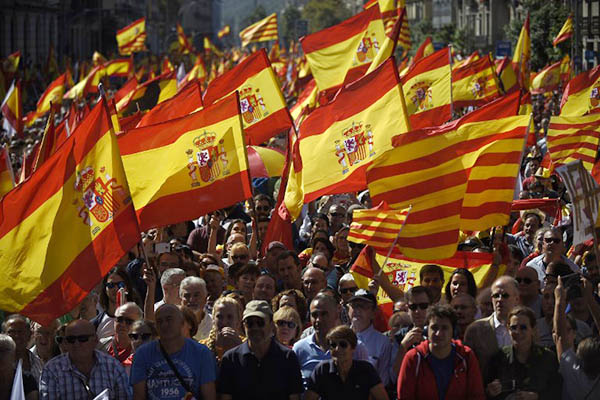 Pressure mounted on Monday against Catalan plans to declare independence after hundreds of thousands of protesters rallied to defend Spanish unity.

The protests followed days of soaring tensions after police cracked down on voters during a banned Oct. 1 Catalan independence referendum, prompting separatist leaders to warn they would unilaterally break away from Spain in days.

Catalan leader Carles Puigdemont, who has yet to decide whether to declare independence in defiance of Spanish authorities, is set to address the regional parliament on Tuesday evening. Hundreds of thousands of flag-waving demonstrators, calling themselves a “silent majority,” packed central Barcelona on Sunday to protest against the plan, which has sparked the country’s worst political crisis in a generation.

Around 350,000 people attended the rally, municipal police said, while organizers put turnout at between 930,000 and 950,000. Some protesters called for Puigdemont to go to jail for holding the independence vote. Others called for dialogue. The slogan for the demonstration—organized by the Societat Civil Catalana, the main anti-independence group in Catalonia—was: “Enough, let’s recover good sense!”

Tentative signs emerged last week that the two sides may be seeking to defuse the crisis after Madrid offered an apology to Catalans injured by police during the vote. But uncertainty still haunts the country as Catalan leaders have said they could declare independence this week.

On the eve of Sunday’s rally, Spain’s Prime Minister Mariano Rajoy refused to rule out suspending Catalonia’s regional autonomy—a move that risks further unrest. But Rajoy assured Catalan leaders that there “is still time” to backtrack and avoid the imposition of direct rule from Madrid.

Kofi Annan, in his role as chairman of The Elders, a group of notable public figures formed in 2007 to promote peace, said: “The constitutional crisis that is unfolding in Spain calls for consultation and not confrontation. I urge the Spanish government and the regional government of Catalonia to renew their commitment to a resolution through dialogue.”

Recent polls indicated that Catalans are split on independence, though regional leaders said police violence during the referendum turned many against Madrid.

Police said 700,000 people joined a pro-independence protest in Barcelona two days after the vote. With its own language and cultural traditions, demands for independence in Catalonia date back centuries but have surged during recent years of economic hardship.

The latest crisis has raised fears of unrest in Catalonia, a northeastern region about the size of Belgium that is home to 7.5 million people and accounts for a fifth of Spain’s economy.

At Sunday’s rally, demonstrators cheered and applauded when a national police helicopter flew over and some people shook the hands of national police officers to thank them for their efforts to stop the referendum. But protesters jeered members of Catalonia’s regional police force, the Mossos d’Esquadra, which had largely ignored a court order to close polling stations and seize ballot boxes during the referendum.

Dozens of protesters surrounded two Mossos vans and called the officers standing on guard in front of them “traitors.”

Nobel literature prizewinner Mario Vargas Llosa warned in an address to the crowd at the end of the rally that “passion can be destructive and ferocious when it is fuelled by fanaticism and racism.”

“The worst of all, the one that has caused the most ravages in history, is nationalist passion,” he added.

The Catalan government on Friday published final results from the referendum indicating that 90 percent of voters backed the proposal to break away from Spain. Turnout was 43 percent as Catalans who reject independence largely boycotted the polls.

The vote was not held according to official electoral standards, as there were no regular voter lists, electoral commission or observers.