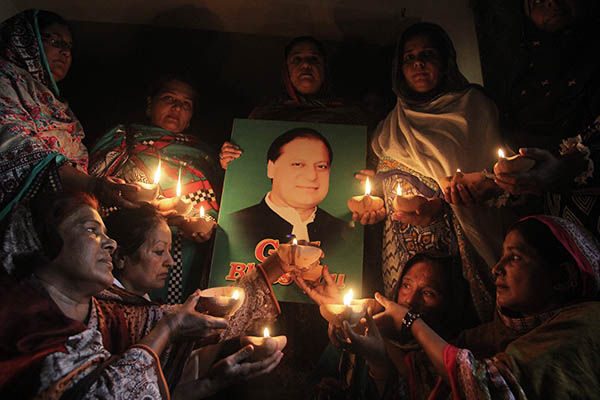 The maltreatment of Pakistan’s elected leaders.

Shaukat Aziz’s book, From Banking to the Thorny World of Politics, does not reveal all the thorns he experienced as Pakistan’s finance minister and later as prime minister.

What has made headlines in Pakistan is his account of Bill Clinton’s 2000 visit to Pakistan to rescue Nawaz Sharif, the ousted and jailed former prime minister. Aziz thinks the visit was motivated by the U.S. president’s belief that Gen. Pervez Musharraf would hang Sharif.

Saudi Arabia was also pressuring Musharraf to let Sharif go. One other person worried about Pakistan’s tendency to kill its elected prime ministers was Rafic Hariri, Lebanon’s ex-prime minister, who paid many visits to get the imprisoned Sharif off the hook. (Hariri was assassinated in 2005; Aziz himself was nearly killed in a suicide attack in 2004.)

One can’t blame the world for thinking so ill of Pakistan’s habit of maltreating its elected leaders. The first elected prime minister, Liaquat Ali Khan, was assassinated in 1951. After that Prime Minister Zulfikar Ali Bhutto was hanged by Gen. Zia-ul-Haq in 1979. Benazir Bhutto, who ruled as prime minister twice during the 1990s, was assassinated in Rawalpindi in 2007. Sharif was overthrown and jailed in 1999. After the Pakistan Peoples Party came to power in 2008, it had its prime minister cashiered by the Supreme Court. President Asif Ali Zardari came under pressure after being accused of treason, which is punishable by death, and fled the country after being prostrated by a breakdown.

Sharif’s party won the 2013 elections and was soon besieged by protest marches and sit-ins. In 2016, he could take no more and has undergone a dangerous open-heart surgical operation in London. Prime ministers in Pakistan are always in danger and the world can’t be blamed for thinking so.