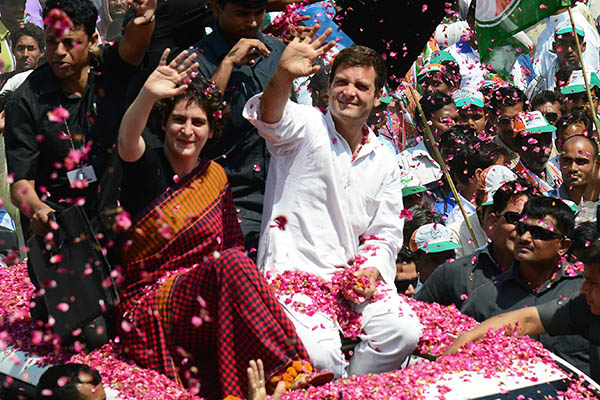 Analysts say Priyanka’s pushback is likely too late to save Congress from defeat at polls.

As India’s ruling Congress heads for what could be its worst ever election defeat, Priyanka Gandhi, sister of lackluster campaign leader Rahul Gandhi, has stepped up to lead the political dynasty’s pushback.

Priyanka, 42, has traditionally ceded the limelight to her older brother Rahul, 43, the diffident scion of the country’s most famous political family and frontman for Congress’s campaign. But with the party flailing in opinion polls and the election entering its final stretch, Priyanka has emerged swinging against Narendra Modi, prime ministerial candidate of the rightwing Hindu nationalist Bharatiya Janata Party (BJP).

Priyanka—who looks like her imperious grandmother, late four-time premier Indira Gandhi—has called the battle against Modi and the BJP a “fight for the heart” of Hindu-majority but constitutionally secular India.

Finally heeding calls to play a more prominent role in the campaign, Priyanka declared at the weekend that she was “here to thwart him [Modi]” in his “negative” agenda. “The ideology of Congress is to unite people … while that of the opposition is to divide,” she said.

Modi is seen as a deeply polarizing figure due to his Hindu nationalist rhetoric and failure to swiftly curb deadly anti-Muslim riots that swept Gujarat during his early years as chief minister of the prosperous western state in 2002.

While Priyanka, a mother of two children, has replaced her brother Rahul in the headlines with her attacks on Modi, analysts say her appearance has come too late to rescue the party from a humiliating rout. Furthermore, the financial dealings of her husband Robert Vadra have given the BJP a new opportunity to hammer away at its anti-corruption message after the Congress-led coalition’s two scandal-plagued terms in office.

An investigation by the Wall Street Journal published last week showed that Vadra, an enthusiastic body-builder, had amassed a vast property empire since getting his start in real estate with a few thousand dollars of investment. Vadra, an unpopular public figure who drew ridicule on social media after appearing with Priyanka to vote in Delhi wearing pink trousers and a plunging V-necked T-shirt, has denied allegations of any wrongdoing and has never faced any legal charges.

But that has not stopped the BJP from accusing Vadra of illegal business dealings and profiting from his connections with the Gandhi clan in a video titled The Son-in-Law issued at the weekend.

“The effective problem with Priyanka is her last name [Vadra] and the extent to which her appeal may have been compromised by the Vadra connection,” said Subhash Agrawal, founder of think tank India Focus.

Congress has ruled India for most of its history since its independence from Britain in 1947 and the Nehru-Gandhi lineage has provided three prime ministers. Priyanka’s mother Sonia is currently president of the party.

Rahul and his sister are extremely close after a childhood scarred by the political assassinations of their grandmother, and their father, former premier Rajiv Gandhi. But while Priyanka has a natural connect with voters, Rahul, who has called power “a poison,” is often shy and awkward.

“Priyanka has spontaneity and an ability to deliver a punch that crowds like—Rahul is more subdued,” said Gandhi family biographer Rasheed Kidwai.

Italian-born Sonia groomed Rahul for the leading political role, but he has shown strong reluctance to take up his dynastic mantle and a leaked U.S. diplomatic memo in 2007 said he was “widely viewed as an empty suit.”

“Priyanka clearly has got the BJP a little shaken up and the campaign no longer looks like such a walkover, but she’s been brought out too late,” analyst Agrawal said. She only emerged as a force on the campaign trail after voting was well under way in India’s five-week staggered general election in which results are due on May 16.

Many in Congress have long hoped Priyanka will take a greater political role but for now she has said she will only campaign in the constituencies of her mother and her brother. “We must respect her decision,” said Congress party spokesman Shakeel Ahmed.

Still, her emergence has fueled the rumor mill that she, and not Rahul, will be the future hope for the party as it recovers from what promises to be a thumping defeat after 10 years in power. But what Congress insiders call “the elephant in the room”—the mushrooming property wealth of Priyanka’s husband—might become an even bigger issue if she took a larger political role, analysts say.

The BJP has already dropped heavy hints that Vadra’s wealth could be the subject of an investigation if it forms the next government. The Vadras “should only be scared of the law. Be the Vadras ever so high, the law is [still] above them. The law spares none, be it the rich, the famous or the related,” senior BJP leader Arun Jaitley said in a blog on Monday.