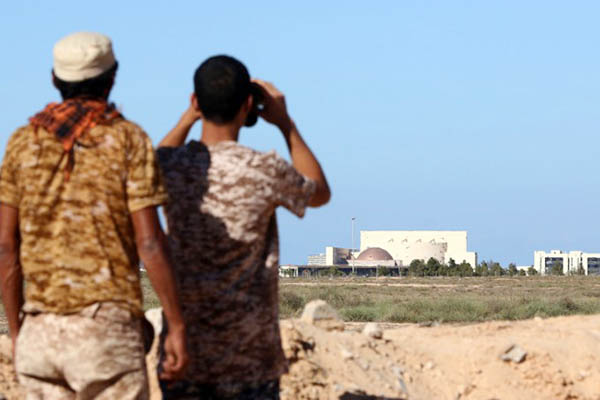 Push to oust extremists from Sirte continues as officials capture several positions across the city.

Pro-government forces said they captured the Islamic State group’s headquarters in their main Libyan stronghold of Sirte on Wednesday, scoring a major victory in a push to oust the jihadists from the city.

I.S. fighters remained in several parts of the city, officials said, but seizing control of their headquarters has been the key goal of the forces loyal to Libya’s Government of National Accord.

The taking of the headquarters followed rapid gains by pro-government forces through the city on Wednesday and after the United States last week launched airstrikes on I.S. positions in Sirte at the GNA’s request. The city’s fall to I.S. in June last year raised deep concerns in the West, with fears the jihadists were gaining an important foothold just across the Mediterranean from Europe.

“The Ouagadougou center is in our hands,” the operations center for pro-GNA forces said, referring to the Sirte conference center where I.S. had set up base.

Reda Issa, a spokesman for the forces, said I.S. jihadists remained in three residential areas of the city and in a villa complex near the seafront. “The announcement of the liberation [of Sirte] will only be made once the entire city is liberated,” he told AFP.

The capture of the headquarters came after a lightning advance on Wednesday that saw pro-GNA forces seize the University of Sirte campus just south of the conference center and the Ibn Sina Hospital to the north.

The operations center said 16 pro-GNA fighters were killed in the battle for Sirte. It was unclear how many I.S. fighters may have been killed, but the center said earlier that at least 20 jihadists had died in fighting for the university campus.

The operations center also said pro-GNA forces had lost contact with one of their military planes, without providing further details.

The I.S.-linked Amaq news agency said the group’s fighters had downed a warplane in Sirte, resulting in the pilot’s death.

Pro-GNA forces entered Sirte in June, after I.S. seized the city amid the chaos that followed the 2011 ouster of Muammer el-Gaddafi. Their advance slowed as the jihadists hit back with sniper fire, suicide attacks and car bombings but on Sunday pro-government forces said the “countdown” had begun for the final assault on I.S.’s holdout positions in the city.

Washington launched its airstrikes on Aug. 1, with President Barack Obama saying it was “in America’s national security interest” to help the GNA “finish the job” of ousting I.S. from Sirte.

In a statement on Wednesday, the U.S. Africa Command said 29 strikes had been carried out against I.S. positions as part of “Operation Odyssey Lightning” as of Tuesday. The pro-GNA operations center said further U.S. raids were carried out on Wednesday but did not say how many. The raids targeted I.S. positions, destroyed two armored vehicles and stopped an explosives-laden car before it could reach loyalist forces, it said.

The Washington Post reported on Tuesday that U.S. commandos were working from a joint operations center on the outskirts of Sirte, the first time they have directly supported Libyan forces in the anti-I.S. fight.

Quoting U.S. officials speaking on condition of anonymity, the Post said the U.S. forces were operating alongside British troops, helping to coordinate American airstrikes and providing intelligence. The Pentagon would not comment on the specifics of the Post story, but has previously acknowledged small U.S. teams are in Libya.

GNA chief Fayez al-Sarraj had told Italy’s Corriere della Sera in an interview published Wednesday that his government had asked only for “airstrikes which must be very precise and limited in time and geographical scope.”

“We do not need foreign troops on Libyan soil,” Sarraj said.

Western powers are backing the GNA in a bid to bring stability to Libya, which has been wracked by turmoil since Gaddafi was ousted and killed in October 2011, with rival governments vying for power and armed groups battling to control vast energy resources. As well as fears over I.S., Western nations are also deeply concerned over the fate of Libya’s vast oil reserves, the largest in Africa.

On Wednesday six Western countries including Britain, the United States and France called for control of all oil facilities in Libya to “be transferred unconditionally and without preconditions or delay” to the GNA.

The countries expressed particular concern about “reports of increasing tension” near Zueitina, one of Libya’s largest coastal oil facilities.