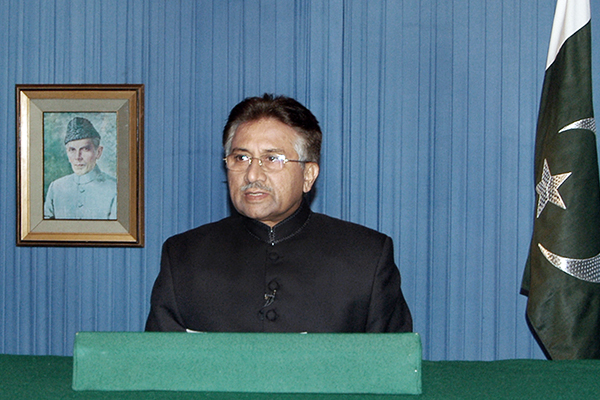 Whereas there is visible ascendancy in the activities of extremists and incidents of terrorist attacks, including suicide bombings, [improvised-explosive device] explosions, rocket firing and bomb explosions, and the banding together of some militant groups have taken such activities to an unprecedented level of violent intensity posing a grave threat to the life and property of the citizens of Pakistan.

Whereas there has also been a spate of attacks on state infrastructure and on law enforcement agencies; whereas some members of the judiciary are working at cross purposes with the executive and legislature in the fight against terrorism and extremism thereby weakening the government and the nation’s resolve, diluting the efficacy of its actions to control this menace.

Whereas there has been increasing interference by some members of the judiciary in government policy, adversely affecting economic growth, in particular; whereas constant interference in executive functions, including but not limited to the control of terrorist activity, economic policy, price controls, downsizing of corporations, and urban planning, has weakened the writ of the government; the police force has been completely demoralized and is fast losing its efficacy to fight terrorism and intelligence agencies have been thwarted in their activities and prevented from pursuing terrorists.

Whereas some hard-core militants, extremists, terrorists, and suicide bombers—who were arrested and being investigated—were ordered to be released. The persons so released have subsequently been involved in heinous terrorist activities, resulting in loss of human life and property. Militants across the country have, thus, been encouraged while law enforcement agencies subdued.

Whereas some judges by overstepping the limits of judicial authority have taken over the executive and legislative functions; whereas the government is committed to the independence of the judiciary and the rule of law and holds the superior judiciary in high esteem, it is nonetheless of paramount importance that the honorable judges confine the scope of their activity to the judicial function and not assume charge of administration.

Whereas an important constitutional institution, the Supreme Judicial Council, has been made entirely irrelevant and non est by a recent order and judges have, thus, made themselves immune from inquiry into their conduct and put themselves beyond accountability.

Whereas the humiliating treatment meted out to government officials by some members of the judiciary on a routine basis during court proceedings has demoralized the civil bureaucracy and senior government functionaries, who, to avoid being harassed, prefer inaction. Whereas the law and order situation in the country as well as the economy have been adversely affected and trichotomy of powers eroded.

Whereas a situation has thus arisen where the government of the country cannot be carried on in accordance with the Constitution and as the Constitution provides no solution for this situation, there is no way out except through emergent and extraordinary measures.

And whereas the situation has been reviewed in meetings with the prime minister, governors of all four provinces, and with the chairman Joint Chiefs of Staff Committee, chiefs of the armed forces, vice chief of Army staff, and corps commanders of the Pakistan Army.

Now, therefore, in pursuance of the deliberations and decisions of the said meetings, I, Gen. Pervez Musharraf, Chief of Army Staff, proclaim emergency throughout Pakistan. I hereby order and proclaim that the Constitution of the Islamic Republic of Pakistan shall remain in abeyance. This proclamation shall come into force at once.