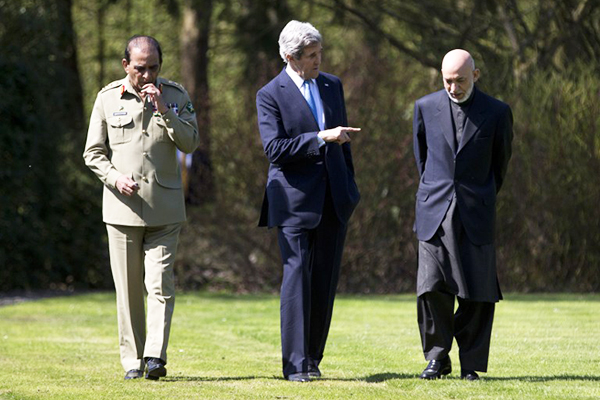 John Kerry, U.S. Secretary of State, tried to get Afghanistan and Pakistan on the same page on Wednesday, trying to end their mistrust so they could work together as NATO prepares for its Afghan withdrawal next year.

After more than three hours of talks in Brussels, Kerry said he had made progress with Afghan President Hamid Karzai and Pakistan Army chief, Gen. Ashfaq Kayani. But all sides still had “some very specific homework to do,” he said, declining to give details so as not “to raise expectations or make any kind of promises that cannot be delivered.

As the talks closed Wednesday, neither Karzai nor Kayani made any comment.

Kerry said: “We have all agreed that results are what will tell the story, not statements at a press conference.” The three parties would “continue a very specific dialogue on both the political track as well as the security track. We have a commitment to do that in the interests of Afghanistan, Pakistan, and peace in the region,” he added.

The U.S. government sees Pakistan as a key player in brokering peace with Taliban insurgents who have been battling the Kabul government and U.S.-led NATO forces since 2001. Relations between Islamabad and Kabul, however, have been strained for years and Karzai has accused Pakistan of aiding the Taliban who seek refuge along their rugged border.

Signs earlier this year of an improvement in relations have faded amid disagreements between the two over how to promote peace efforts by bringing the Taliban on board.

Afghanistan says Pakistan, which backed the Taliban regime which ruled from Kabul from 1996 to 2001, continues to support the insurgents to counter the influence of arch-rival India. Washington for its part has pushed the trilateral discussions since 2009 in an effort to ease such suspicions but they are deep-seated.

Pakistan strongly rejects the charge it helps the Taliban, and in a statement Monday posted on the website of its Embassy in Brussels said it “consistently endeavored to facilitate an Afghan-led and Afghan-owned peace process.” It said: “Pakistan remains committed to continue its positive and constructive role toward a durable peace in Afghanistan. Pakistan is convinced that a peaceful, stable, prosperous, and united Afghanistan is in the interest of Afghanistan, Pakistan, and the region.”

Kerry—who arranged the meeting on top of a visit to Brussels for a NATO foreign ministers’ gathering—said as he went into the talks earlier that he was “very hopeful for a productive series of discussions.” The talks would cover “security and other issues regarding the relationships in the region as well as the road forward heading toward 2014,” he said.

On Monday, Kerry had described 2013 as a “critical year” as NATO progressively handed over responsibility of security to Afghan forces and prepared for withdrawal next year. With the stakes high for all concerned, the talks would be “about how we can advance this process in the simplest, most cooperative, most cogent way so that we wind up with both Pakistan’s and Afghanistan’s interests being satisfied, but most importantly, with a stable and peaceful Afghanistan.”