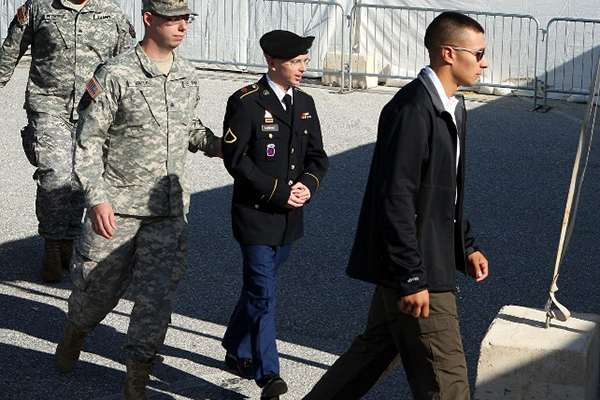 Military tribunal judge also allows testimony from one of the U.S. Navy SEALs from the Abbottabad operation.

The U.S. government must prove “beyond a reasonable doubt” that Pfc. Bradley Manning knowingly helped Al Qaeda by leaking secret documents to the whistleblower website WikiLeaks in order to convict him of “aiding the enemy,” a judge ruled on Wednesday.

Judge Col. Denise Lind’s ruling at a preliminary hearing raises the bar for convicting Private Manning—who has admitted to leaking the documents but denied aiding the enemy—of the most serious charge he faces. Lind said the prosecution in the military tribunal must prove, beyond doubt, that Private Manning had “reason to believe such information could be used to the injury of the U.S.” by an armed group like Al Qaeda or another nation.

The 25-year-old U.S. Army private admitted in February to leaking a trove of secret war logs and diplomatic cables to Julian Assange’s WikiLeaks and said he would plead guilty to 10 of the lesser charges against him, which could see him sentenced to 20 years in military custody. Private Manning has denied aiding the enemy, a charge which carries life sentence.

Lind also ruled that the government can call as a witness one of the commandos who took part in the May 2011 raid that killed Osama bin Laden. The Navy SEAL would testify on condition of anonymity that documents leaked to WikiLeaks were found in the Al Qaeda leader’s compound in Abbottabad, Pakistan. The judge thus discarded a defense motion to “preclude evidence that Al Qaeda or Al Qaeda in the Arabian Peninsula allegedly received” the information in question.

The hearing, due to wrap up later Wednesday, was the first since a group pressing for more government transparency flouted a military ban by releasing a secretly-recorded audio clip of Private Manning’s testimony. The leak marked the first time since Private Manning was arrested in May 2010 that the world has heard his voice. It was secretly taped on Feb. 28, when Manning explained why he funneled a trove of U.S. military and State Department documents to secrets-spilling WikiLeaks between November 2009 and May 2010.

As a result, mobile phones and recording devices, previously only banned inside the courtroom, are now outlawed in the press gallery as well, where the hearing is being broadcast.

“To say that the judge was unhappy about this violation of the rules of the court would be an understatement,” a military spokeswoman told reporters covering the hearing. “This media operation center is a privilege, not a requirement. Privileges can be taken away.”

Manning’s trial is set to begin on June 3 at Fort Meade near Washington.