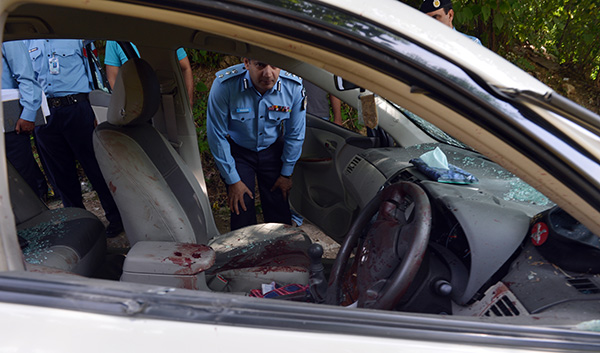 One passerby also killed after unidentified gunmen target Chaudhry Zulfiqar while he was en route to court.

The main government prosecutor in the murder case of former prime minister Benazir Bhutto was shot dead in Islamabad on Friday en route to the next hearing at an antiterrorism court, police said.

State prosecutor Chaudhry Zulfiqar was shot multiple times by gunmen who intercepted his vehicle in a busy, middle-class neighborhood of the capital. His bodyguard was also wounded and a female passerby killed.

“Chaudhry Zulfiqar was driving his car. He lost control and the car crushed a woman passerby,” police officer Mohammad Yousuf said. “Zulfiqar was rushed to hospital where he succumbed to his injuries,” he added.

Police said the gunmen fled on a motorcycle.

The prosecutor, who worked for the Federal Investigation Agency, was on his way to an antiterrorism court hearing the Bhutto case in the neighboring city of Rawalpindi. He had been given extra government security last year after police investigators working on the case received threats, which also named him.

It was not immediately clear who was responsible for the shooting.

“I cannot comment. I’m in a state of shock,” Zulfiqar’s deputy Azhar Chaudhry said when asked to comment.

Wasim Khawaja, spokesman for Islamabad’s government-run PIMS hospital, said that Zulfiqar’s bodyguard was out of danger.

Nobody has been convicted or jailed for Bhutto’s assassination in a gun-and-suicide attack after a campaign rally in Rawalpindi on Dec. 27, 2007. Former president Pervez Musharraf’s government blamed the killing on Pakistani Taliban chief Baitullah Mehsud, who denied any involvement and was killed in a U.S. drone attack in 2009.

Bhutto’s son, Bilawal Bhutto Zardari, who is chairman of the Pakistan Peoples Party, has accused Musharraf of her murder. In 2010, a U.N. report said Bhutto’s death could have been prevented and accused Musharraf’s government of failing to give her adequate protection.

Musharraf, who ruled from 1999-2008, returned to Pakistan on March 24 to contest next week’s general elections, but has been barred from running for Parliament over a series of legal cases dating back to his time in office. He was first put under house arrest for sacking judges in 2007 when he imposed emergency rule, before also being detained in the Bhutto case for an additional two weeks.