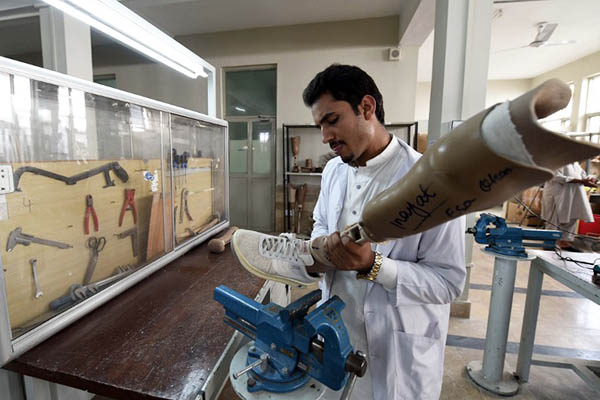 Teenager Ali Shah was on his way to school when he lost half of his right hand and his left leg after stepping on an IED—the Taliban’s weapon of choice in its decade long insurgency. Now the 13-year-old, along with hundreds of others maimed by such bombs every year, is learning to use a prosthetic in a society where the disabled have traditionally been shunned and forced to stay at home.

Nearly a year on, he is set to receive a new leg at the Pakistan Institute of Prosthetic and Orthotic Sciences in Peshawar (PIPOS) where thousands have been treated, a lifeline for many in the country with some of the highest IED death rates in the world. Ali remembers the day he lost his limbs vividly.

“I thought something happened to my heart when the blast occurred, I lost my senses, someone took me to the doctor and there I returned to my senses,” he said, speaking at the Doctors Without Borders hospital where he is being treated. It’s not clear who was behind the blast that tore into Ali at the school gate as he was coming back from lunch.

“I had been walking along with some classmates but I was walking faster and left them behind,” he said. He was rushed by his father to a field hospital, then taken on an arduous 12-hour journey to Peshawar—by car, van and bus, bleeding all the way—where medics saved his life.

But the road to recovery, which has taken months to allow his wounds to heal enough for him to be fitted with the prosthetic, has only just begun. “There is stigma around disability and a fear of becoming a burden on one’s family, especially for young men who are supposed to take responsibility to provide for their family,” said Shaista Aziz, a spokeswoman for Doctors Without Borders, which runs several trauma centers in Pakistan’s northwest.

While the use of landmines planted by armies has fallen globally since the 1990s, the number of civilians hit by improvised explosive devices has skyrocketed, according to Action on Armed Violence. The British charity recorded a 70 percent global rise in civilians killed or maimed in such attacks between 2011 and 2013.

In Pakistan, which has the highest number of IED-related casualties along with Iraq and Afghanistan, Taliban and other Islamist groups have used improvised devices and firearms to kill more than 27,000 civilians and security forces since 2004, according to the South Asia Terrorism Portal monitoring group.

Headquartered in Peshawar where it was founded in 1981 to deal with the wounded during the Soviet invasion of Afghanistan, PIPOS clinics treat around 10,000 patients a year—many of whom are victims of suicide blasts, IEDs and landmines.

The majority of the patients are given free treatment, paid for by the International Committee of the Red Cross, while the center also boasts a prosthetics college.

For Muhammed Nabi, a tailor from Kohat in his mid-twenties who lost his left leg when he trod on an IED, the artificial limb has proven a lifeline. “It was a very sad incident in my life. But then I realized I couldn’t spend the rest of my life in this sadness,” he said, as he practiced walking with his new leg in the center’s rehabilitation hall. “With this artificial limb I will—Inshallah—be able to be normal in my life and in my job.”

Beyond the physical loss, many patients who lose limbs undergo severe psychological trauma that can lead to irregular behavior, according to patient liaison officer Zahida Parveen. Sometimes even a new limb is not enough to overcome the long-term mental struggle.

“They feel dependent on others. For example after receiving appliances [prosthetics] some patients did not try to participate in normal life activities to support themselves,” Parveen said.

Ali Shah is set to return to the same school where he stepped on the bomb, committed to pursuing his education. “I want to complete my education and want to serve my village people after that. I want to be a teacher so I can educate the youngsters,” he said.