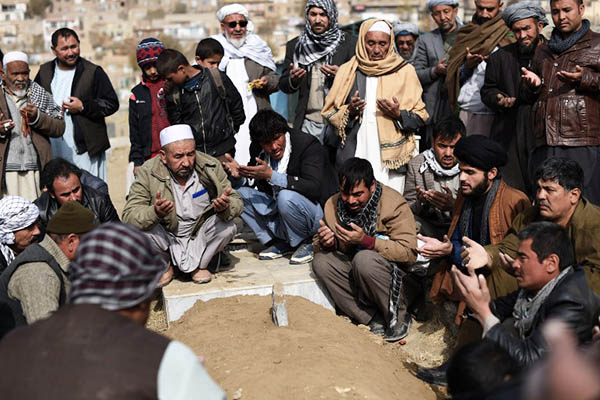 An international rights group and victims’ families urged the Afghan government on Tuesday to protect the minority Shia community after a bloody mosque bombing, the latest in a series of deadly sectarian attacks.

A massive suicide blast claimed by the Islamic State group targeted a Shia congregation in Kabul on Monday, killing at least 27 people and wounding 64. “ISIS has stepped up its horrific and unlawful attacks on Shia public gatherings, making no place safe,” Patricia Gossman, a senior researcher at Human Rights Watch, said in a statement. “The government, Shia leaders, and civil society groups should work together to develop appropriate ways to improve security during vulnerable public and religious gatherings so that Shia community members can exercise their basic rights,” she said.

Amnesty International, in a statement on Monday, said Afghan authorities “have a duty to take effective measures to protect Shia Muslims from attacks and end impunity for previous abuses against the Shia community.”

The latest attack was mounted as worshippers gathered for the major Shia ceremony of Arbaeen, marking the end of a 40-day mourning period after Ashura. Ashura itself commemorates the death of Imam Hussein, the grandson of Islam’s Prophet.

Angry Shia mourners on Tuesday accused the government of failing to provide protection as they buried loved ones. “We voted for this government, people’s fingers were cut by militants for voting. In return the government should provide us with security,” said Ghulam Haydar, a relative of a victim. “I want the international community to help us get rid of the terrorists and stop them from harming the people.”

The interior ministry said it had suspended four police officials in connection with the attack and launched a thorough investigation.

In July I.S. jihadists claimed twin explosions that ripped through crowds of Shia Hazaras in Kabul, killing at least 85 and wounding more than 400. Those bombings marked the deadliest single attack in the Afghan capital since the Taliban were ousted from power in a 2001 U.S.-led invasion.

Fighters from I.S., which controls territory across Syria and Iraq, have been making steady inroads in Afghanistan, challenging the Taliban on their own turf—mainly in the east.