Protest in Bangladesh Over Blogger’s Murder 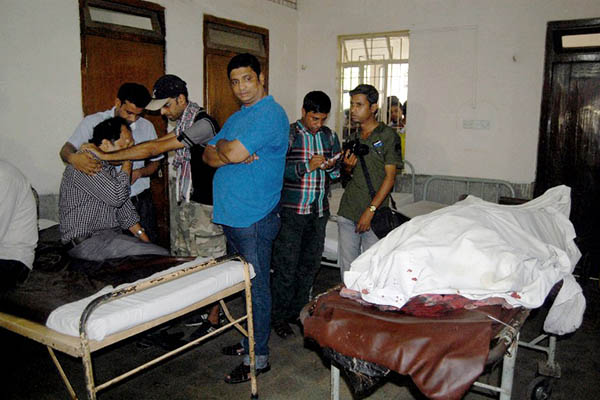 Secular activists marched through Sylhet on Wednesday to demand justice for a blogger hacked to death this week, the third such attack by suspected Islamists since February.

Scores of activists, mostly university students, peacefully protested through the city, accusing the government of failing to protect free thinkers and urging authorities to halt “this evil force.”

Wielding machetes, a masked gang killed Ananta Bijoy Das, 33, a banker, editor and blogger, on Tuesday as he headed to work in Sylhet, an attack that fellow writers said highlighted a culture of impunity. “Murder won’t silence our mouths,” the protesters chanted as they marched along a key highway and through Sylhet university, a secular bastion. “We want justice for Ananta and the other bloggers who have been murdered by Islamist militants. The government must crush this evil force,” said Debashish Debu, a secular activist who joined the protest.

Das was the third blogger killed in the Muslim-majority nation since February when Bangladeshi-born U.S. citizen Avijit Roy was hacked to death in Dhaka. The deaths have sparked international condemnation, with Washington on Tuesday calling on Dhaka to bring perpetrators of the latest killing to justice.

The activists had called for a strike in Sylhet on Wednesday, although police said offices and schools were mostly open and traffic was running almost as normal. “Scores of young protesters held two marches in support of the strike,” said deputy commissioner of police Faisal Mahmud. He said police suspected Islamist militants were behind Tuesday’s killing although there have been no arrests so far.

He said Das’s brother filed a criminal case against four unidentified people over the killing, saying Das was murdered by an “extremist fanatic group.”

New York-based Human Rights Watch said the latest killing was part of an “alarming” trend of violent intolerance of religious freedom and speech in Bangladesh. “This pattern of vicious attacks on secular and atheist writers not only silences the victims but also sends a chilling message to all in Bangladesh who espouse independent views on religious issues,” said Brad Adams, Asia director at HRW.

Bangladesh is an officially secular country but more than 90 percent of its 160 million population are Muslim. The country has seen a rise in attacks by religious extremists in recent years.

A free speech group also launched a blistering attack on Sweden after it denied Das a travel visa before the attack. Swedish PEN slammed the refusal as “horrific” and said it would demand an explanation from the authorities, claiming Das would still be alive if the visa had been granted. “We want to know where the directive came from,” said Swedish PEN official Elnaz Baghlanian.

Swedish PEN had invited Das to Stockholm to speak on May 3, World Press Freedom Day, about the deteriorating situation in Bangladesh for journalists and writers.