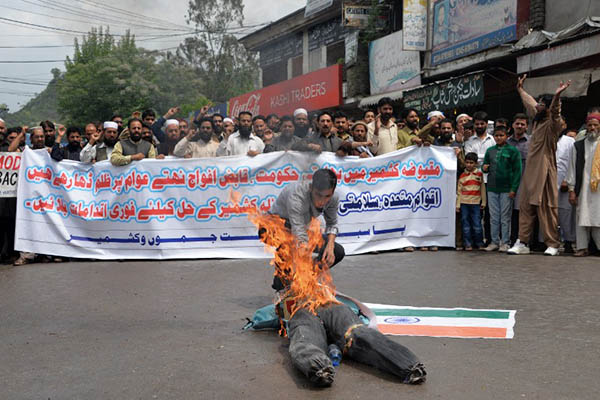 India-administered Kashmir remains under lockdown as protests continue over crackdown on separatists.

Hundreds of people in Pakistan-administered Kashmir burnt India’s flag and an effigy of its prime minister on Sunday in protest at a crackdown on separatists in the Indian part of the divided region.

Refugees from India-administered Kashmir rallied under the banner of “Pasban-e-Hurriyat” (Protectors of Freedom) in Muzaffarabad, the capital of the Pakistani side. Many children also took part, displaying placards reading: “Go India Go back [from Kashmir]” and “Release Kashmiri leaders.”

Police in India-administered Kashmir shot dead a 16-year-old boy on Saturday during a demonstration on the outskirts of Srinagar, as a separatist strike shut down the Himalayan region on a second day of violent clashes. Indian police said they had arrested two officers accused of shooting the teenager a few hours after the incident.

A preliminary investigation showed one of the officers fired his rifle on the directions of another officer “in violation of laid down SOP,” a police statement said. Security was heavy on Sunday in the western part of the Kashmir Valley where the shooting occurred, while shops were shuttered and few residents were seen on the streets.

Pakistan’s foreign ministry spokeswoman Tasnim Aslam in a tweet expressed sympathies and condolences to the families of the victims “of the brutality of Indian security forces.”

“Brutality and coercion will not suppress aspirations and struggle of Kashmiris of their right to self-determination, promised by the United Nations Security Council resolutions,” she said. “Pakistan is deeply concerned at increase in systematic human rights violations in Indian occupied Kashmir and condemns brutal use of force by Indian security forces.”

India-administered Kashmir has been rocked by violent protests for the past week after the brother of a top rebel leader was killed by the army near the town of Tral in the south of the Kashmir valley. Authorities have put all top separatist leaders under house arrest to prevent them from leading protests.

On Friday, 30 people, mainly police officers, were injured as pro-Pakistan demonstrators in Srinagar set fire to an Indian flag and hurled rocks at them during a protest at the arrest of another separatist leader. Protesters have taken to the streets in India-administered Kashmir since Friday to vent their anger at top separatist leader Masarat Alam Bhat’s detention after he fronted a rally earlier in the week where followers waved Pakistani flags.

Anti-India sentiment runs deep across Kashmir, a picturesque Himalayan region that is the country’s only Muslim-majority state. The region has been divided between India and Pakistan since the two countries gained independence in 1947. Both claim it in its entirety.

Although several rebel groups have been fighting Indian forces since 1989 for independence or merger with Pakistan, street protests have become the main mode of opposition to Indian rule.