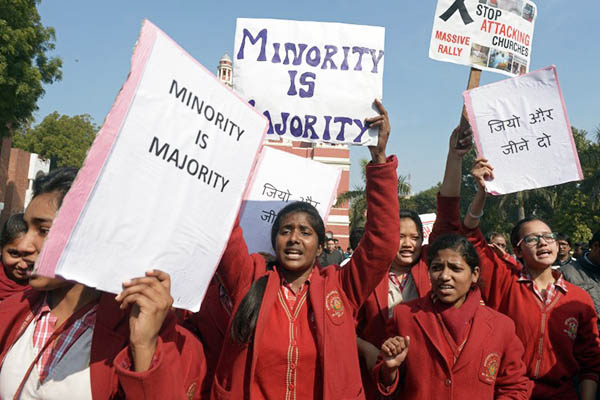 Police pulled demonstrators, including several nuns and priests, onto buses after they gathered outside one of New Delhi’s largest cathedrals to demand action over a series of recent attacks on churches. Carrying crucifixes and placards that read “rights for all religions,” the protesters demanded Modi’s Hindu nationalist government speak out against the attacks in the capital.

Television footage showed one nun lying on the ground outside Sacred Heart Cathedral as officers tried to drag her onto a bus while another was seen shouting from the bus door.

“We are feeling insecure since this new government has come. The government and police haven’t given any proper response to these attacks,” said Father Lawrence, a Catholic priest from south Delhi. “Five churches have been attacked in Delhi in the last two months without any proper response from the P.M. or any other central minister,” he added.

The latest attack occurred on Monday when someone stole ceremonial items from a Catholic church, while another in north Delhi was hit by an arson attack in December. Protesters accused hardline Hindu nationalists of carrying out the recent attacks on the churches, although police say there is no evidence.

“Our only demand is we want justice and we want protection for all our churches. We want to be safe and secure. We are not demanding as Christians, we are demanding as citizens of India,” Delhi Catholic archdiocese spokesman Father Savarimuthu Shankar told NDTV. “You [the government] are not able to protect a small municipal minority, how are you going to protect the whole of India?”

Critics say Hindu hardliners have felt emboldened since Modi’s Bharatiya Janata Party (BJP) stormed to power at general elections last May. Hardliners have been accused in recent months of trying to convince Muslims and Christians to convert to Hinduism, sparking outrage from political opponents in parliament.

U.S. President Barack Obama urged India to promote religious tolerance during a visit to Delhi last month, saying it “will succeed so long as it is not splintered along” religious lines.

Police defended their detention of around 100 of the peaceful protesters after they tried to march on the residence of Home Minister Rajnath Singh. “They did not have any permission. They cannot hold a protest on the public road,” Delhi joint police commissioner Mukesh Meena told NDTV.

Singh promised “an impartial inquiry” into the recent attacks and “proper” security of churches, after meeting with protest leaders later Thursday. “The minister told the group [of protest leaders] that the government would not tolerate any discrimination on basis of caste, color or religion,” Singh’s office said on Twitter.

While Hindus account for more than 80 percent of India’s 1.2 billion-population, the country is officially secular and is home to sizeable numbers of Muslims, Buddhists and Christians.