Protesting for the Planet 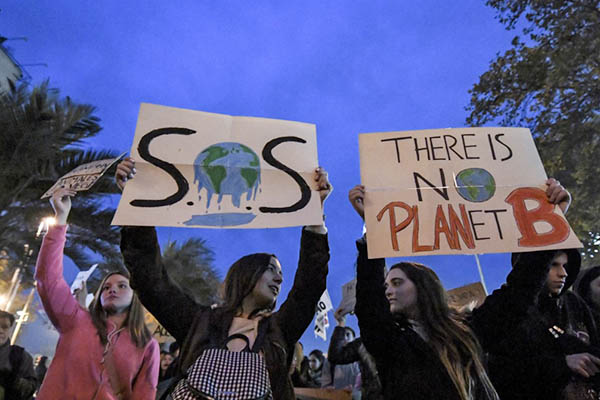 Young activists rally across Europe ahead of E.U. elections to demand action against global warming

Hundreds of thousands of young climate activists rallied across Europe on Friday ahead of E.U. Parliament elections as part of protests worldwide demanding action against global warming.

In Germany alone, wrote the Fridays for Future group on Twitter, “320,000 people have gathered on the streets for today’s #ClimateStrike—our biggest strike yet!”

From Lisbon to Oslo, children and youths skipped school and voiced their anxiety about inheriting a warming planet with melting ice caps and worsening storms, floods and droughts. “You are running out of excuses, we are running out of time,” read one message in Berlin directed at politicians, while another demanded: “The climate is changing, why aren’t we?”

In Warsaw, around 1,000 students lay down on a major city intersection in a brief “die-in” that, an organizer said, was meant to “symbolize what will happen to us in the future.”

“We are all in the same boat,” read a protest sign in Madrid, expressing the shared sentiment of youngsters who rallied in cities across more than 120 countries. Some 15,000 activists marched in Paris, while a roughly equal number demonstrated at Berlin’s iconic Brandenburg Gate, chanting “What do we want? Climate justice! When do we want it? Now!”

“Climate now, homework later!” read one teenage activist’s banner while another warned that “There is no planet B.”

The initiator of the movement, 16-year-old Swedish schoolgirl Greta Thunberg, spoke in Stockholm to some 4,000 supporters. “We will have an existential crisis if we haven’t cut our CO2 emissions in half in 20 years,” she told the cheering crowd. “We are going to start a chain reaction out of mankind’s control. Time is running out.”

While many previous protest movements have started on university campuses, the “Fridays” rallies emerged from among school students—a generation that has grown up with predictions of ecological doom yet witnessed only glacial political change.

“Climate change doesn’t respect borders, climate change will at some point become irreversible,” said Berlin student Aaron Langguth, 21. “That’s why we have to do something now. The students realize that there’s no point going to classes if they don’t have a future.”

Many messages addressed the serious issue in a more light-hearted way, including a sign in Oslo that predicted “the Earth will soon be hotter than a young Leonardo di Caprio.”

In the southern French city of Montpellier, several youths wore only underwear and vine leaves, with posters saying “The Chaud must not go on,” a pun on the French word for ‘hot.’ In Germany, demonstrators demanded: “Make the world cool again” and “Make love, not CO2.”

One hand-written sign issued a direct warning to adults: “If you don’t take us seriously, we’ll scrap your pensions.”

Indeed, many adults have greeted the unprecedented wave of rallies by school children and shown up as #ParentsForFuture and in similar groups of #Scientists, Doctors, Midwives and Queers.

At a protest in Prague, one of more than 15 across the Czech Republic, speakers urged anyone over 18 to “vote for the climate, not for the money.” In Paris, about 100 climate activists entered a district town hall and removed an official portrait of President Emmanuel Macron, proclaiming on banners that “We must get out of fossil fuels,” not subsidize them.

In Germany, Chancellor Angela Merkel has faced heat from young online activists over climate policy as a group of YouTube stars on Friday urged their many millions of fans to vote against her coalition’s parties. “The irreversible destruction of our planet is unfortunately not an abstract scenario but the predictable result of the current policies,” charged the YouTube influencers.

Under the 2015 Paris deal to limit global warming to well below two degrees Celsius above pre-industrial levels, the 28-nation E.U. has pledged to cut greenhouse gas emissions by at least 40 percent by 2030, compared to 1990. But many scientists and climate activists say Europe and all other major economies must sharply raise their ambition.

The U.N. Intergovernmental Panel for Climate Change warned in October that warming is currently on track towards a catastrophic 3C or 4C rise.