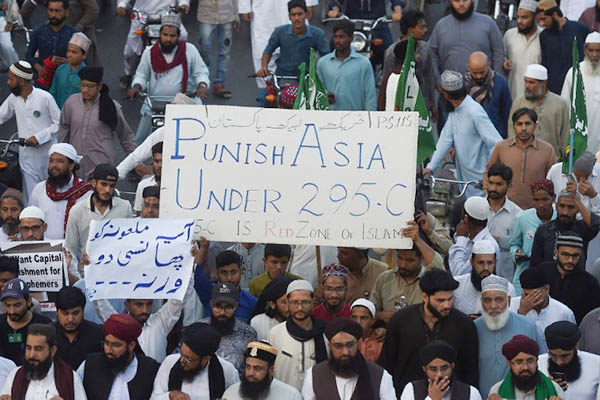 Several thousand Islamist hardliners protested in Lahore on Friday as Pakistan awaits a pivotal ruling in the country’s most notorious blasphemy case, that of a Christian mother who has been on death row since 2010.

The rally, organized by anti-blasphemy Tehreek-e-Labaik Pakistan (TLP), was the biggest of several in cities across Pakistan, with a few hundred protesters also demonstrating in Karachi, and in Rawalpindi.

The Islamists demanded the execution of Aasia Bibi be carried out, days after the Supreme Court heard her final appeal. The court said it had reached a judgment at the hearing on Monday, but that it would not release it immediately for “reasons to be recorded later,” and told media they could not publish comments on the inflammatory case.

Bibi is at the center of the high-profile case, which has divided Pakistan and drawn prayers from the Vatican. A Christian laborer, she was accused of blasphemy against Islam’s Prophet in 2009 by Muslim women she was working with in a field.

The charge is punishable by death under legislation that rights groups say is routinely abused to settle personal vendettas.

Successive appeals against Bibi’s conviction have failed. If the Supreme Court upholds it, the only recourse she will have will be a mercy petition to the president.

Freedom in Pakistan, however, would mean a life under threat by extremists.

The mere accusation of blasphemy is so explosive in the conservative Muslim country that anyone even accused of insulting Islam risks a violent and bloody death at the hands of vigilantes. Also on Friday the Islamabad High Court said it had ruled on a petition that would put Bibi on the no-fly list if she were released. It did not immediately announce its judgment.

Pope Benedict XVI joined in international calls for Bibi’s release in 2010. In 2015 her daughter met with Pope Francis.

Calls for reform to Pakistan’s colonial-era blasphemy laws have been rejected and met with violence. Politicians including new Prime Minister Imran Khan invoked blasphemy during this summer’s elections, vowing to defend the laws.

Thanks to Gen Zia, we have boxed our selves into a corner. With these radical maniacs on the streets, who needs India as an enemy. These guys are in the process of eating the state from within.