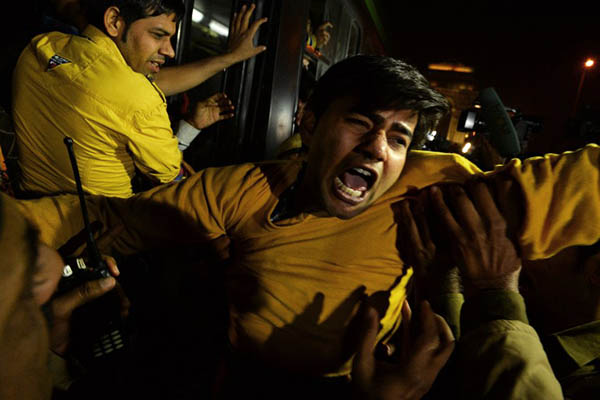 Demonstrators shout slogans after being taken into custody by police officials. Chandan Khanna—AFP

Police say rapist has been given a new identity and had his criminal record expunged.

The youngest convict in an infamous fatal gang rape in New Delhi has been released from a youth correctional facility, police said Sunday, sparking street protests and angry condemnation from the victim’s parents.

Only days after the third anniversary of the attack on a moving bus, Indian police confirmed that the rapist—who is now aged 20—had completed his spell behind bars even though a court ruling on an appeal against his release is due to be heard on Monday. He is now being supervised by a non-governmental agency, effectively meaning he is a free man.

The prospect of the attacker walking free has revived public anger over the attack, with fresh protests being held on Sunday near the iconic India Gate monument in the center of the capital. “The convict was handed over to an NGO. He is no longer under the jurisdiction of the police,” said Delhi police spokesman Rajan Bhagat. “He has been given a new identity and his criminal record has been expunged,” a police source added.

News of the release was immediately condemned by the parents of the victim, who led the protest rally around India Gate before being briefly detained by police. Some of the protesters including the mother of the victim were dragged away by the police who had imposed prohibitory orders in the high-security area.

The physiotherapy student had died of her injuries in a Singapore hospital nearly two weeks after the attack on Dec. 16, 2012. “We want justice for our daughter,” her mother told reporters at the protest site, fighting tears. “I have come out on the streets because I am very disappointed today. We don’t know if we will ever get justice now. Our justice system has left us disillusioned.”

Scores of students joined the protest holding placards and banners, in a throwback to the scenes of angry demonstrations that followed the attack three years ago. One placard read: “When will Nirbhaya get justice” referring to the nickname given to the victim by the media.

Speaking at the India Gate protest on Sunday evening, the victim’s father said the release was “really upsetting.”

“The fact that he has been released shows there is no justice in this country…. The government has let us down,” he said.

India media said the rapist, who cannot be named for legal reasons, had been handed over to a charitable organization on Sunday but police sources said the move had actually taken place some days ago. The name of the NGO has not been released over fears that their offices could be attacked.

News of the release came only hours before a hearing on Monday at India’s Supreme Court where a women’s rights group filed a petition against the release. The parents and women’s rights groups have been opposing the release of the youngest attacker, mainly on the grounds that it was unclear if he had been rehabilitated and was ready to be reintegrated into society.

The attacker was the youngest of a group of men who brutally assaulted the 23-year-old student on a bus, triggering global outrage and protests in India over the country’s high levels of violence against women. He was sent to a correctional home for three years under India’s juvenile laws, while four others were convicted and given the death penalty in 2014. Their appeals against hanging are pending in the Supreme Court.

The student was publicly named by her mother on the third anniversary of her death last week, in an effort to end the stigma facing sex attack victims in India. Under Indian law, the victim of a sex attack cannot be named even after their death.