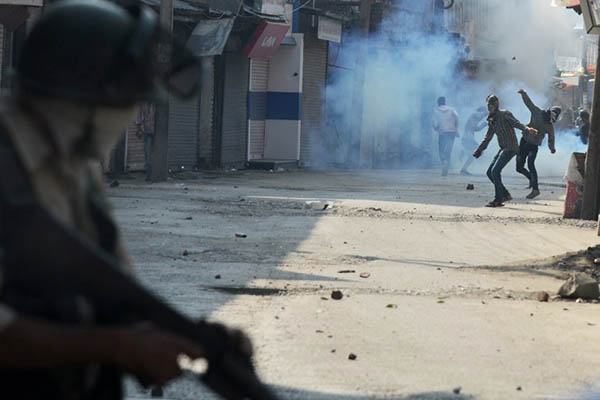 Extremists had targeted 19-year-old driver over rumors he was slaughtering cows.

Authorities imposed a curfew in India-administered Kashmir on Monday after protests over the death of a driver attacked by far-right extremists angered by rumors of cow slaughter, a flashpoint issue for religious tensions in the Hindu-majority country.

Schools and businesses shut and universities cancelled exams as hundreds of police and paramilitary forces patrolled the streets of the mainly Muslim region a day after 19-year-old Zahid Rasool Bhat died of injuries sustained in the Oct. 9 attack.

News of Bhat’s death on Sunday ignited anger in India-administered Kashmir, where protesters threw rocks and clashed with government forces who fired tear gas canisters to disperse them.

“We have imposed restrictions on public movement in many areas to avoid loss of life,” a senior police officer told AFP on condition of anonymity.

Bhat had been in hospital since his truck was firebombed by Hindu activists angered by reports that a ban on slaughtering cows was being flouted in the Muslim-majority region. Two dead cows had been discovered in a stream near the area where his truck was attacked, although there was no evidence he was involved and forensic tests later revealed that the cows had died of poisoning.

His death comes at a time of heightened tensions over the consumption of beef in India after the lynching of a Muslim man wrongly accused of eating beef.

Cows are considered sacred by most Hindus in officially secular India, but millions of Muslims and other minorities view beef as a relatively cheap source of protein.

India is the world’s biggest exporter of beef, which includes buffalo as well as cow meat, an industry mainly run by Muslims. But Prime Minister Narendra Modi’s Hindu nationalist Bharatiya Janata Party wants a nationwide ban on the slaughter of cows, which is prohibited in some but not all states.

Several different groups had called for a shutdown on Monday to protest the attack 10 days ago, which also left a second man with severe burn injuries.

There were fresh protests early on Monday as Bhat was buried in his native village of Botengoo in southern Kashmir.

The region has been tense since a court ordered strict implementation last month of a long-standing but rarely implemented colonial era law banning cow slaughter and sale of beef in the state. Another court has since set aside that order and recommended the state government review the law.

Police have arrested nine attackers after they were identified from CCTV footage. The chief minister of the state, Mufti Mohammad Sayeed strongly criticized the killings, saying India could not allow “kangaroo courts.”