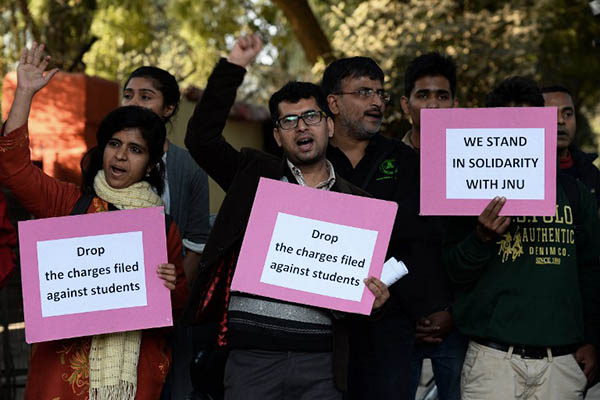 Union leader was taken into custody over ‘anti-Indian’ behavior at a rally last week.

Students and teachers staged a fresh protest in New Delhi on Sunday over a union leader’s arrest at a top Indian university for sedition, accusing the government of cracking down on dissent.

Mohammed Afzal Guru was hanged in 2013 following his conviction over an attack on the Indian parliament in 2001 that left 10 people dead.

Kumar has been accused of “anti-Indian” behavior at Tuesday’s rally, during which some protesters allegedly shouted support for Guru and for neighboring Pakistan.

India and Pakistan each administer part of Kashmir but claim the Himalayan territory in full and have fought two of their three wars over it.

“The government and police can’t just shut down voices that don’t agree with them. Everyone in this country has a right to his opinion and that must be respected,” Delhi University student Arzoo Sahani said at a protest that drew more than 100 in the city center, one of several since Friday.

Home Minister Rajnath Singh reiterated on Sunday that “anyone who raises anti-India slogans or tries to question national unity will not be spared by this government.”

Kumar, who remains in police custody has denied any wrongdoing. Sedition is punishable by imprisonment.

The arrest is the latest incident to fuel claims of religious and cultural intolerance under Modi. Last month a young scholar from India’s lowest Dalit caste committed suicide, sparking protests over social discrimination after he was suspended from Hyderabad University for allegedly assaulting the head of the student wing of Modi’s party.