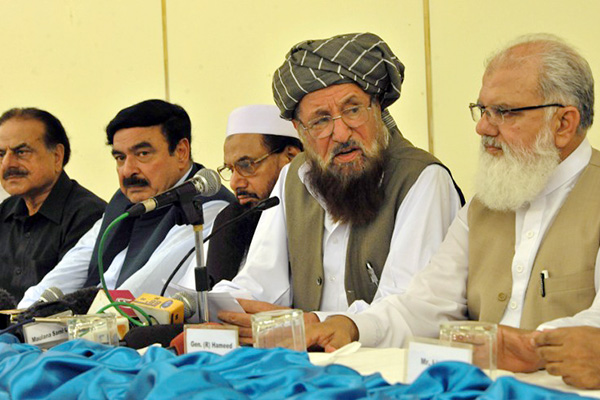 The PTI has already approached Haq, nicknamed the “Father of the Taliban,” after emerging from the May 11 elections as the largest party in the troubled province of Khyber-Pakhtunkhwa. The region, on the frontline of a nearly seven-year domestic Taliban insurgency, suffers near-daily bomb and shooting attacks claimed by militants.

Former cricket star Khan has called for an end to military operations and peace talks with the Taliban, making his party’s victory in the northwest a significant development. He has vowed to put together a provincial coalition government in the province and turn it into a “role model” for the rest of the country.

“We will talk to all stakeholders for establishment of peace in our province, meeting with Maulana Sami-ul-Haq was a part of that,” said Shaukat Yousafzai, a party leader who won a seat for the party in the provincial assembly.

Haq heads his own faction of the religious Jamiat Ulema-e-Islam party and runs a madrassah that has educated several Taliban leaders in the past.

Yousafzai said a PTI delegation led by Pervez Khattak, the incoming provincial chief minister, met Haq late Monday. Hamid-ul-Haq, the cleric’s son and a former M.P., confirmed that PTI leaders came to seek support. “They asked Sami-ul-Haq to play his role in establishment of peace in the province,” Hamid-ul-Haq said. “Sami-ul-Haq told the delegation that he will play his role in establishment of peace and initiation of peace talks.”

Pakistan’s incoming prime minister Nawaz Sharif on Monday said he was open to talks with the Taliban, saying bringing peace was one of his top priorities.

Pakistan’s umbrella Tehreek-e-Taliban movement signaled in February its willingness to enter peace talks with the government if a member of the opposition would agree to serve as guarantor. At the same time, it stepped up attacks against the ruling coalition composed of the Pakistan Peoples Party and its main allies, drastically curtailing their ability to campaign during the election.

Previous Pakistani governments, as well as the military, have forged ad hoc peace deals with insurgent factions in various parts of the northwestern tribal belt, which have often broken down quickly. The Taliban, who denounce democracy as un-Islamic, killed more than 150 people during the election campaign, including 24 on polling day itself.

Taliban spokesman Ihsanullah Ihsan said the insurgents would “wait until political parties form their government,” adding that anyone who “comes into conflict with Islam” would be targeted.

Suicide, bomb and gun attacks blamed on Taliban and Al Qaeda-affiliates have killed nearly 6,000 people since July 2007, according to an AFP tally.

Some of the points in this article are very offensive to readers which should have not been included in the article. Nobody has nicknamed him” Father of Taliban”, how childish this was of the author to state this. I just want to know how the author will feel if anyone calls him a “son of bush” or “son of Castro”. Newsweek should publish stories from mature authors and a**wipes like Farooq Naeem should be left for smaller jobs like watering plants or opening doors.

Start trying to look at the bigger picture, Usman. BTW Sami Ul Haq’s wikipedia page too refers to him as Father of Taliban. Zionist conspiracy, right ?

He’s been named the ‘Father of Taliban’ all over the internet and even academic journals and books. The reason for this is because he actually did teach and support many Taliban leaders, including Mullah Omar, and other jihadist militants from his Deoband seminary and still continues to have contacts with different ideological extremists, as seen at DPC, standing with varied backgrounds as Hafiz Saeed, Hamid Gul, Ludhianvi, etc.

Imran Khan bring it on

An absolutely unnecessary debate appears to emerge without concentrating on the context or the outcome. Can this unnecessary debate stop militancy in Pakistan? We want peace by bringing Taliban in the mainstream of moderate Islam. They are a reality and they could not be eliminated even by super powers alliance. It would be great service If Maulana Sami Ul Haq or the PTI could do it.

instead of fighting upon the nick name of the maulana, is it understandable to go for peace talks? i mean, what about the blood of innocent civilians who died at their hands?
second question, by doing this, are we going to agree this certain sect, in a country like Pakistan where the majority of people adhere to Islam, but yet divided in sects and sub sects?
third question, what should we expect from this militia who self-righteously can claim any Muslim a kafir and save the right to kill in the name of “true” Islam?