PTI Calls Off Talks With Government 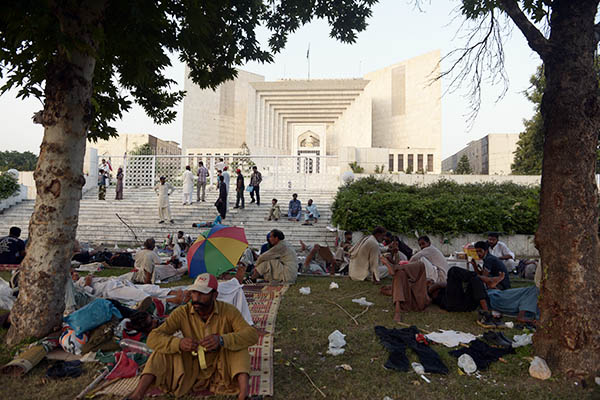 PTI and PAT protesters camped out in front of the Supreme Court. Farooq Naeem—AFP

Opposition party claims Islamabad is not seriously considering its demands, chief of which is the resignation of Nawaz Sharif.

Cricketer-turned-politician Imran Khan on Thursday called off talks with the government that were aimed at ending protests seeking the fall of the prime minister.

Khan and populist cleric Tahir-ul-Qadri have led staged a sit-in outside Parliament for the past two days, demanding Prime Minister Nawaz Sharif quit. Talks to end the standoff, which began a week ago with “long marches” from Lahore, started on Wednesday but made little headway.

Khan insists the May 2013 general elections, won in a landslide by Sharif’s Pakistan Muslim League (Nawaz) party, were rigged, despite independent international observers judging it free and credible. The former cricket star has demanded Sharif resign and call new elections and on Thursday repeated his insistence the P.M. must quit before talks.

“The talks with the government are over. How can these talks proceed when we first want resignation of Prime Minister Nawaz Sharif?” Khan said. “I want to tell you Nawaz Sharif that I will not leave this place until you step down.”

Between them, the protest rallies of Khan’s Pakistan Tehreek-e-Insaf (PTI) and Qadri’s Pakistan Awami Tehreek (PAT) have drawn tens of thousands of supporters this week. But as Khan made his address from the top of a shipping container outside Parliament on Thursday, there were barely a few thousand supporters of both parties scattered over the protest site.

PAT has said it wants “meaningful dialogue” and the Army has called for a negotiated end to the showdown. A number of Pakistan’s key trade partners and aid donors, including the United States, Britain and the European Union have also urged a political solution.

On Thursday the National Assembly passed a unanimous resolution rejecting calls for Sharif’s resignation and vowing to uphold democracy. Lawyers also staged a national strike in protest at the PAT and PTI sit-ins.