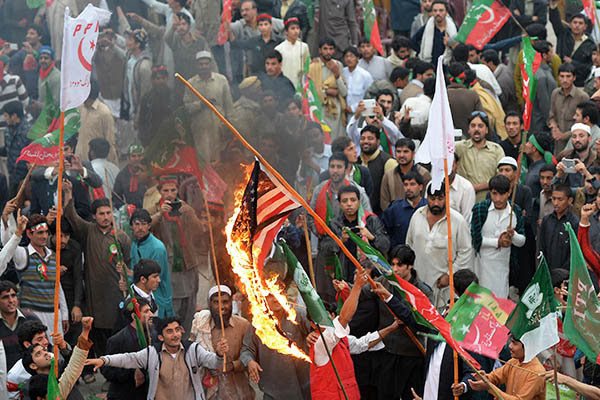 Shireen Mazari, a spokesperson for the ruling party, hailed the PTI’s success in forcing the Pentagon’s decision. She said the party’s protests—which have included vigilante stop-and-search operations targeting truck traffic in Peshawar—would continue. “The U.S. decision to halt NATO supplies through Torkham doesn’t affect our protest,” she said. “We will continue … until drone strikes are stopped.”

PTI, its chief, Imran Khan, and its coalition allies have demanded the Islamabad government close all routes through Pakistan for NATO convoys unless U.S. drone strikes stop.

Pentagon spokesman Mark Wright said on Tuesday that the U.S. had “voluntarily halted” shipments of cargo leaving Afghanistan through the Torkham border crossing in Khyber-Pakhtunkhwa province. Torkham is a key transit point used by the Americans and NATO to withdraw military hardware from Afghanistan as part of a troop pullout set to wrap up by the end of 2014. Another border crossing for NATO convoys, in Balochistan province, is not subject to the PTI protests, and convoys there are understood to be unaffected by the suspension.

U.S. officials said trucks have been told to wait for now in holding areas in Afghanistan, with Washington expecting the route to resume operating soon. A U.S. defense official said Washington believed Islamabad fully supported the use of the route and that it would soon restore security to the area.

Islamabad signed a deal with the U.S. in July last year allowing NATO convoys to transit Pakistan until the end of 2015, but a spokesman for Pakistan’s interior ministry said they were unable to intervene: “Maintaining law and order is a provincial subject, and the provincial government is responsible for security of NATO trucks. We can’t direct them in this regard.”