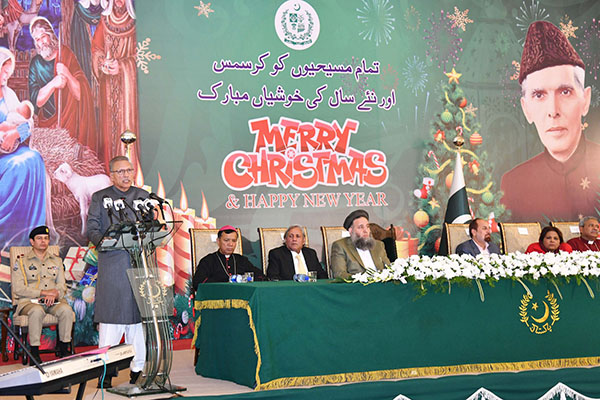 Pakistan’s president congratulates Christians across Pakistan ahead of Christmas, as he vows government will ensure religious freedom

The incumbent Pakistan Tehreek-e-Insaf-led government is committed to ensuring that it protects the rights of all minorities, as envisaged by the Quaid-e-Azam Muhammad Ali Jinnah in his historic Aug. 11, 1947 address, and as enshrined in the Constitution of Pakistan, said President Arif Alvi on Monday.

Addressing a ceremony at the Aiwan-e-Sadr in Islamabad ahead of Christmas, the president congratulated Christians in Pakistan, and globally, saying he was very pleased that the Ministry of Religious Affairs had arranged this ceremony.

Alvi said Pakistan’s national flag and its white color reflected the country’s commitment to peaceful and harmonious co-existence between majority Muslims and minority religions. He said Jinnah’s address to the fist Constituent Assembly of Pakistan had ensured complete religious freedom to all the minorities in the country. Additionally, he said, religious harmony and tolerance of religious beliefs was a vital part of the Sunnah of Islam’s Prophet.

The president said the government would ensure that all the minorities would be treated equally, adding that he appreciated the Church raising its voice against Islamophobia in the West.

Religious Affairs and Interfaith Harmony Minister Noorul Haq Qadri also addressed the ceremony and congratulated the Christian community on Christmas. He said Pakistan belongs to all the communities residing in it, regardless of religion or creed, as promised by Jinnah.

The lawmaker claimed Pakistan was the safest country for minorities in comparison to the growing unrest in the rest of South Asia. This statement stands in contrast to Pakistan’s global standing, with the U.S. retaining Islamabad on its religious freedoms watchlist for “tolerating or endorsing” the eroding of religious freedom.

Qadri hailed the opening of the Kartarpur Corridor as a milestone that proved the incumbent government was dedicated to protecting religious sites of minorities.

The minister Pakistan had zero tolerance for forced religious conversions—a dubious claim considering the Human Rights Commission of Pakistan has reported that cases of forced conversion are actually on the rise, with a report from 2014 alleging about 1,000 women in Pakistan are forcibly converted to Islam every year.

Qadri said Christmas would be celebrated across Pakistan this year with the same religious zeal and fervor as it was done in the past. “Jesus Christ was one of the great messengers of Allah Almighty. He gave the message of love, peace, tolerance and sacrifice for adoption by the humanity,” he added.

Earlier, the bishops from Lahore led prayers for the peace and prosperity of Pakistan, and for the people of India-held Kashmir. A group of students from Edward College, Peshawar also performed several Christmas hymns and songs.