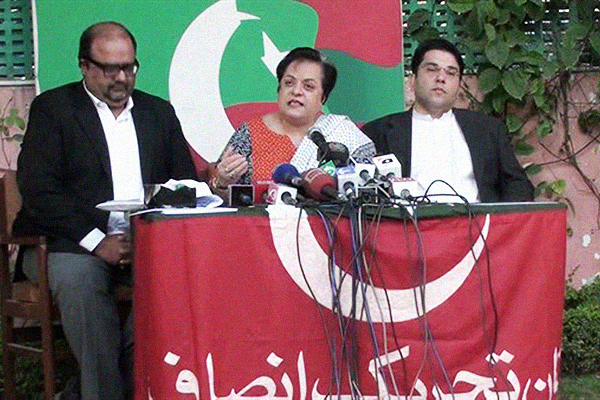 Pakistan Tehreek-e-Insaf, which leads the ruling coalition in Khyber-Pakhtunkhwa province, has asked the provincial police to book both the director and Pakistan station chief of the U.S. Central Intelligence Agency over the Nov. 21 U.S. drone strike in Hangu, which killed six Haqqani network militants.

In her letter of Nov. 27 to the Station House Officer of Tal Police, Hangu, Shireen Mazari, PTI’s central information secretary, accuses CIA Director John Brennan and alleged Station Chief Craig Osth of “committing the gross offences of committing murder and waging war against Pakistan.” She has demanded police include their names in the First Information Report filed on the day of the Hangu strike against, originally, “unknown persons.”

The letter from Mazari, who is known for her self-harming theatrical politics, alleges: “Osth is running an illegal clandestine spying operation throughout Pakistan but specifically in Khyber-Pakhtunkhwa and annexed tribal areas, wherein Osth and his allies (names not known yet) throw a Global Positioning System device at a targeted house or car, and the drone, which is remotely controlled from an undisclosed location, strikes at the target.”

Without offering evidence, Mazari says the Hangu strike also claimed the lives of several children. She has demanded both the “interrogation” of Osth and the prevention of his leaving Pakistan. “The undersigned is further concerned that the accused Craig Osth might try to avoid the course of law and run away from the country,” she writes, adding that the U.S. Embassy in Islamabad is being used for “criminal activity.”

The outing of Osth’s name as the CIA’s station chief in Pakistan is a breach of diplomatic norms. In recent years, the Pakistan Army, piqued by U.S. pressure, had disclosed the name of one of his predecessors, forcing him to quit the country.

PTI, founded by cricketer Imran Khan, has stepped up its anti-U.S. rhetoric after the Hangu strike in the province it governs, and the Nov. 1 strike in federally-administered North Waziristan which killed Pakistani Taliban chief Hakimullah Mehsud. Khan has also threatened to stop NATO supplies through Khyber-Pakhtunkhwa unless drone strikes are discontinued. Derided for being soft toward the Taliban and having failed to live up to even the most modest electoral expectations, the PTI is under increasing public scrutiny—something which, say analysts, explains its relapse into hyper anti-Americanism.